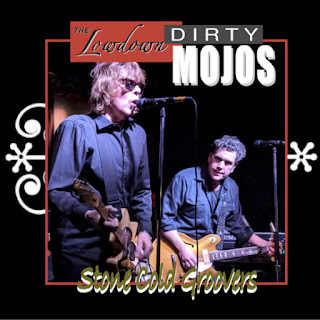 Straight outta gritty Hamilton, Paul Wootten and Stephen Foster first teamed up in the '90's in the bluesy The Crawlin' Kingsnakes. Getting back together in 2018, they put together a solid backing band featuring a revolving crew of folks from Hammer legends Crowbar, Simply Saucer and Junkhouse. Now comes a second album, with a wider release and buzz, enough to get them a recent nomination for a Maple Blues Award, for best new group.
The concept is simple enough, a love of tight, nasty '60's R'n'B, electric blues that you have to move to. Simple idea, but that means the very best playing, and the ability to put down a groove that won't let up. Then there's the material. You can't just get up there and play covers, and Wootten and Foster write tunes that sound classic but are brand-new.  "Glory Train" has a great theme, jumping on the blues train, playing with Brother Ray, and Sister Rosetta. "Shot'a Rhythm 'n' Blues" makes it even clearer, bringing up the great ancestors like John Lee Hooker and Sam & Dave in a track that would have even the most lethargic tavern-goer rush the dance floor. And "Shotgun Wedding" ("She was seven months gone/and he was none too quick") is in the grand tradition of "You Never Can Tell" and "I Knew The Bride (When She Used To Rock 'n' Roll)."
The guitar licks sting, the piano rolls, the backing singers and horns add all the right fills, and every cut feels like a party. In fact it reminds me a lot of Doug & the Slugs if they had been strictly an R'n'B band, and I don't make that comparison to one of Canada's very best show bands lightly.
Posted by Bob Mersereau at 10:04 AM