MUSIC REVIEW OF THE DAY: DAVE GUNNING - THE SAME STORM 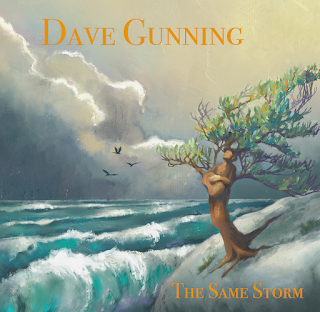 It's impossible not to like Dave Gunning. He's the friendliest, most pleasant, humble, and appreciative musician on the East Coast, and one of the funniest too. I saw him entertaining the crowd at the Lunenburg Harbour Folk Festival this past summer with a ten-minute shaggy dog story (it was actually about a dog) before he even played a note. Seriously, I'd pay to hear him talk.
Luckily, he can also sing, play, produce, and write great songs, often about the Maritimes but universal in their humanity. Like Gunning, these are small-town and straightforward folks, and the tales celebrate generations on the land and water. Both hard times and good ones come and go, and everything is approached with quiet dignity. "My Father's Tools" is a quintessential Gunning lyric, a grown son working with that inheritance, knowing someday he'll pass it on to his child. Of course, it's not just the tools, it's the example of how they were used, "straight as a rule."  Another one also co-written by longtime colleague Jim Dorie is "Viola's Song," the story of the courageous Black businesswoman arrested at a New Glasgow movie theatre for sitting in the whites-only section in 1946. Gunning knows it's a story that must be kept alive: "We've come so far since then, but the worst keeps happening/and we're right back again like nothing's changing." Gunning's songs make you want to be a better person and appreciate all that we have here in the Maritimes.
He's on the road again, with these new songs, old greats, and I'm sure some more ridiculous jokes. Catch him soon at:
Wednesday, Oct. 19 - Charlotte Street Arts Centre - Fredericton
Thursday, Oct. 20     - Water Street Dinner Theatre - Saint John
Friday, Oct. 21          - The Dunn Theatre                 - St. Andrews, NB
Sunday, Oct. 23        - Second Wind Music Centre   - Florenceville-Bristol, NB
Monday, Oct. 24        - Trailside Music Hall               - Charlottetown
Posted by Bob Mersereau at 10:30 AM