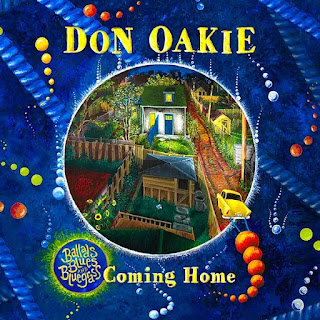 Yacht rock?  Not quite, but Ontario's Don Oakie did put off his music career for 35 years to build, wait for it, yachts. But the muse that first hit him back in the '70s when he was traveling the world and playing coffee houses always stayed with him, and he's finally been able to devote the time to record and release his debut, at the modest age of 70.
Seems he kept up his chops, and his knowledge of the folk music trends as well. Oakie shows he can handle lots of different roots styles, featuring his finger-picking guitar work. There's a righteous bluegrass version of "Folsom Prison Blues," a gorgeous instrumental called "Angels and Devils," and lots of blues and ballads. Split between originals and covers, instrumentals and vocal numbers, old tunes and new, it's pretty much a showcase of everything he's soaked up and stored for decades.
He sure isn't rusty. His instrumental take on "Ain't No Sunshine" is full of masterful, jazzy licks, with a delicious, mellow tone throughout. And "Steel Guitar Rag" has lots of showy fun playing. Six of the ten cuts were recorded in P.E.I., with ace guests such as fiddler Gordie MacKeeman, and one of the last recordings of the Acadian trad group Vishtan before accordion player Pastelle LeBlanc passed away. That song, "Laura," was written 45 years ago as a tribute to Oakie's mother, and what a pleasure it is to realize all this great music didn't just disappear.
Posted by Bob Mersereau at 7:12 PM