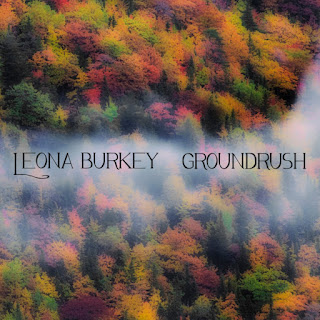 Cape Breton-raised & Halifax-based, Burkey grabs your attention right off the bat on the opening track "Let Love Fill the Room," her compelling voice matched with a big electric guitar chord. This isn't going to be some soft folk singer-songwriter record.
Sure, she's a singer-songwriter, and the folk feel is here, but so are lots of rock and pop moments, and just as many jazzy-bluegrass touches, with fiddle and mandolin prominent on several songs. There are grand melodic changes, major to minor, emphasizing the sweet/sad nature of her songs, a bit of melancholy, with lots of hope. I'd happily put her in the same school as Shawn Colvin, Mary Chapin Carpenter, and Nanci Griffith, who proved you could write hit folk songs in the early '90s.
A crack team of high-end players is feature on the album, starting with producer A.J.H. Gillis, along with bluegrass ace Ray Legere on fiddle and mandolin, Phil Sedore and Roger Stone handling guitars, Kev Corbett multitasking, Terra Spencer playing piano and singing, Mary Beth Carty adding accordion, Robbie Crowell on keys, pretty much a Nova Scotia all-star squad. There's a strong sense of purpose in the songs, with heartfelt words that mean a lot to Burkey, and the players respond in their expert roles. "Ancient Waters" starts out quiet and pretty, a tender song from a mother to a child, but the message becomes more important, as backing vocals and Corbett's pedal steel build the urgency. "It's okay to wear your heart upon your sleeve/it's okay to love anyone you please/if that love's not right, it's okay to leave/trust your compass to point you where you need to be."
There's room for some lighter moments as well, including a fun cover of the 70's Susan Jacks hit "I Thought Of You Again," featuring Legere's fiddle turning it into a bluegrass number with a Johnny Cash boom-chicka-boom rhythm. I can't wait to check out her Fredericton show on Saturday, Dec. 3 at The Tipsy Muse, there are singles and a video out right now for the title track, and the full Groundrush album arrives Dec. 26, with more shows in the new year.
Posted by Bob Mersereau at 7:29 PM