FEIST - LOOK AT WHAT THE LIGHT DID NOW 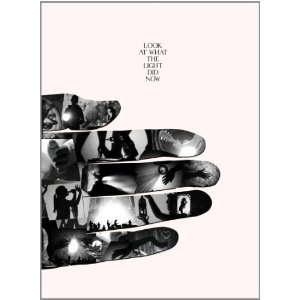 The centerpiece of this DVD-CD combo is a 90-minute making-of documentary, but certainly one of the better ones, and quite different than any other music one I've seen.  It's a document of the behind-the-scenes creation of The Reminder disc, and its accompanying tours.  But instead of focusing on Feist, it's an explanation of the larger creative process of all the collaborators:  the producer, musicians, photographer, video director, etc.

Like Daniel Lanois and Gord Downie have done recently on their tours and creative projects, Feist desired to make her concert more that just a band on stage, and album presentation something artistic.  She makes the creative element another performer.  Or as one band member says, "This isn't a concert, it's an art project."  Live, the new member of the band was a shadow puppeteer, using 30-foot projection backdrop to do real creations each night, from finger-painting with mud to fireworks to silhouettes of legs.  It's a visual treat, and yes, much more than just a band on a stage. You feel you are part of a broader artistic evening than simply "a show".

This is the same idea Feist uses to make her songs, her CD jacket, her videos.  She involves equally creative people to craft a bigger piece.  As she explains, "It's more exciting to bring it to life with people."  Sometimes the film works that way too.  Instead of giving us one live take of I Feel It All, we get a montage that cuts between the video, several live versions, and the work of the shadow puppeteers on stage.  We get to see the full concept of the audio and visual elements of I Feel It All.  It's a particularly strong piece of film making.

Now, if you've ever been around artists, they can be a little ...well...precious sometimes about their work.  I say this with great respect of course, but it does get a bit much hearing them talk about how special it all was, instead of simply enjoying it.  Watching somebody crunch a bowl a dry leaves for percussion isn't as interesting as hearing the final results, for instance.  Care to hear the video choreographer talk about the ideas of chaos and unison and Darwinian theories within 1234, anyone?  We don't really have to hear from the truck driver either.  Mostly though, it's a well-paced and interesting look.

We don't hear much from Feist herself, just a few interview comments.  This isn't about her as much as it is about the whole artistic collective involved in making a tour and an album.
I like that there isn't any personal glimpses here, it's exactly what you do want, the artistic side.  As much as I'm interested in her as a person too, it's none of my business, or at least nothing I need to look at the body of work that is The Reminder and appreciate it.

The whole set comes with a more-than-generous amount of bonus material, including several live tracks, videos, shorts films, and a full audio discs of previously unreleased live cuts and duets.  That stuff alone would make this something for the average Feist fan, but the film should be required viewing for anyone interested in a creative career.
Posted by Bob Mersereau at 8:15 PM