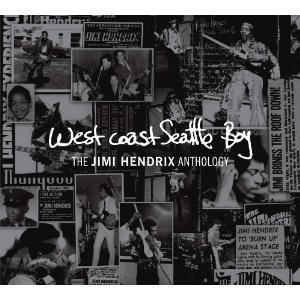 If you've lost track of the constant flow of Hendrix releases, it's no surprise.  Lawsuits, labels and family business have muddied the waters for years.  Now with half-sister Janie firmly in control, the vaults are open like never before.  Every outtake and live show is being examined, and the Experience Hendrix team says there's still plenty to come.

This latest set had all the prospects of being classic overkill.  After all, there's already been a 4-disc boxed set, a BBC collection, and several full cd's of outtakes, etc., of various interest.  What could be left?  It turns out there's not that much in terms of actual new songs, but as for different versions and interesting obscurities, this set goes a long way.  First off, the story begins with a full disc of tracks Hendrix did as a sideman, for the Isley Brothers, Little Richard and King Curtis.  That's smart, this stuff hasn't been on any of the reissues.  The other three discs are full of favourites in various forms of completion, whether it's Are You Experienced in its basic first version, without the psychedelic effects, or a hotel version of Dylan and The Band's Tears Of Rage, a magic moment of intimacy and never available in any form before.  Even if you've previously felt saturated by the stream of releases, most fans and even casual listeners will find this a rewarding box.

The set also comes in stripped-down and cheaper packages, including a one-CD highlights version, and another that includes the 90-minute DVD from the box.  That's the version I picked up, in a half-price bin at Future Shop, such is the value of CD's these days.  So it cost me, get this, nine bucks.  Now this is a great value, because the DVD is wonderfully made, a full history of Jimi that deserves to be a documentary on the History Channel.  Filled with tons of unseen photos from family archives, vintage film clips, and period interviews, the piece is narrated by Hendrix himself, as voiced by Bootsy Collins.  Using letters to his father and friends, interview transcripts, and other sources, we hear Jimi's words throughout his life.  Done by Bob Smeaton, the man behind The Beatles Anthology, I'm surprised this excellent film isn't receiving more attention.
Posted by Bob Mersereau at 3:08 PM