MUSIC REVIEW OF THE DAY: TOM PETTY - RUNNIN' DOWN A DREAM 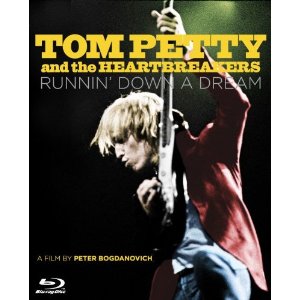 TOM PETTY and the HEARTBREAKERS - RUNNIN' DOWN A DREAM

Finally on Blu-ray, this doc has been around for a couple of years, and truly sets the standard.  Directed by Peter Bogdanovich, it clocks in at a fabulous four hours, totally ignoring any attempts at courting the movie theatres at release, and instead heading straight for the DVD collector and Petty fan.  The thing is, Blu-ray was still in infancy when it was released, and it's taken this long to see the thing in its best quality.

And what a fine treat it is.  This is loaded with remarkable footage, even home video of the day the old Petty group Mudcrutch left Florida for fame and fortune, only to have their vehicle break down within hours of leaving.  This laugh aside, it pretty much sums up the bumps and bruises Petty and the Heartbreakers have endured, and shows there is a lot of pain on the road to fame, and even when you get there, it continues.  Career milestones are often accompanied by equal amounts of grief, and even tragedy.  Band members get fired or quit, bassist Howie Epstein dies, a mess of drugs and sadness.  Wounds are opened, and some heal.  We get the warts, but you can tell there's still some personal problems left out, but only the ones that are more gossip than music.

Oh yes, there's lots of it, music galore, and in all its glory.  Part of the reason it does run four hours is that for once we don't feel cheated with truncated songs.  Bogdanovich wisely uses all the good stuff, which is equally important to the story.  In the end, it's the ultimate tale of how much hard work goes into making a great rock and roll band, which has remained the overriding factor in Petty's career.  Nothing, not friendship, the band, happiness, enjoying the money, none of it has come before making the best music, in Petty's unwavering dedication to the songs and the shows.  You can fault him for that sometimes, but you can't argue with the results.  Best of all, the film doesn't sugarcoat any of it, it's all true and here.

The only criticism isn't of the film itself, but rather the way it's been released.  The first, exclusive version was only available at Future Shop in Canada for a few months, with three DVD's, including the full 30th anniversary concert, and a CD of rare live songs from the film soundtrack.  Then it came out as a 2-DVD set, but that had a bonus song not on the 4 -disc set.  Now the Blu-ray comes without the bonus stuff from the other sets!  So to sum up, if you want the best quality and all the extras, you have to own all three of them.  That's just not fair to those with a collector's mentality.
Posted by Bob Mersereau at 6:12 PM