MUSIC REVIEW OF THE DAY: GIANT HAND - STARTING AS PEOPLE 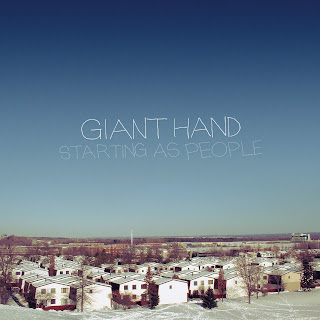 Ottawa's Kirk Ramsey, a/k/a Giant Hand, obviously has never met a chord he didn't like.  He must love them, because when he finds one, he plays it over and over again.  That's not quite fair, because I think his songs have three or four in there, but it's hard to tell since his monotonous voice barely changes pitch at any point.  That's a plus really, since when he does go past his two-note vocal range, the results are pitch-painful.   The repetitive nature of his singing and playing does have a hypnotic drone quality to it, but I found that to be quite dangerous, as I was driving while previewing the disc, and I nearly found myself in a New Brunswick highway ditch full of snow.

Obsessed with death, Ramsey tells us about the man who dug his own grave, and hiding from the monsters as a kid.  Guess what?  That monster at the door?  It was just his Dad coming to tell him to turn off the light and get to sleep!  Awesome.  In the central opus of this mini-disc, Another Step Down, which is a song about death, he's like a child hiding in his bed under the sheets, a familiar theme in the Giant Hand ouevre.  The big statement we are offered here is "...when I die, where will I go?/That's a question that God only knows".  Stunning.

Ramsey's first Giant Hand album came out in 2009, and this is a mini-album, with six tracks.  Well, five actually, since one of them is 40 seconds of someone walking along, finally opening a door with a key.  It's called From The Garden To The Cave.  Rather than feeling ripped off, this is actually my favourite track on the disc.  Look, I get this is indie and outsider, and anti-big production, fun for Ramsey and whatever friends and listeners want to get into it, but Christ it's dumb.
Posted by Bob Mersereau at 7:34 PM