MUSIC REVIEW OF THE DAY: JEFF HEALEY BAND - GET ME SOME 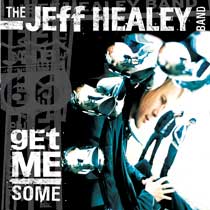 THE JEFF HEALEY BAND - GET ME SOME

Just reissued, this disc from 2000 was Healey's last real stab at mainstream success in the rock and blues world.  It was done after a five-year break from recording, during which time Healey was becoming more and more disenchanted with chasing chart numbers.  His story was similar to so many blues players, who have stated their careers with buzz and some love from radio and retail, but quickly found out blues only goes so far competing with the ever-changing pop world.  Think of Colin James and Johnny Lang, for instance.  Healey's See The Light had been a smash, but he had peaked with the first album, and was by that time looking at a career on the treadmill.  A switch to hot jazz and playing for personal satisfaction made him, one must hope, a happier man.

I can recall Get Me Some smelling of desperation when it came out.  It's never a good sign when a Dianne Warren song gets recorded, and I Tried was certainly an attempt to get back on the charts, for radio stations looking for another Angel Eyes.  There's a Marc Jordan song too, and three of the cuts were punched up in Los Angeles, with Heartbreaker Benmont Tench adding keyboards.  But the added slickness can't obscure the fact that Healey could play guitar really well (duh), and when you go back and pay attention, the guy really could sing well, especially on the ballads.  He had a soft and tender spot in his vocals, and an ability to hit that one blue note spot on.

Get Me Some failed to connect, but it's not a bad album, there are several high-quality songs here, and some very fluid guitar solos, plus lots of different styles to keep it lively.  However, I'll argue its lack of success paved the way for more important music and shows, including the jazz albums Healey made in his last decade, plus the rewarding live shows at his Toronto clubs and on the road.  Watching the former guitar hero master the trumpet was one of the great transitions in Canadian music.
Posted by Bob Mersereau at 2:48 PM