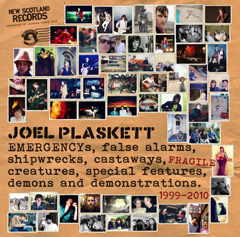 Hey, Joel sure isn't the first one to do this, release a collection of b-sides, demos, alternates, and the like. Rarely do they hit the high quality mark this one does though. It reminds me of that Elvis Costello disc, Taking Liberties, another 20-track collection that became a must-have instead of an interesting aside. Like Costello, Plaskett's meanderings take us to different spots that are just as interesting as the regular tracks. Plus, the guy is a workhorse, so there's lots of killer around, and here, no filler.

The 20 cuts come from his entire solo career, so we get demos back to 1999, just post-Thrush Hermit, including the appropriately titled Waiting To Be Discovered, and the beloved True Patriot Love in its original state. There are several cuts here you're going to know already from the regular versions, but as demos we get a different spin. Drunk Teenagers is even crunchier is its rawer state. Nothing More To Say's famous opening f-word was originally the s-word, not as abrasive, and a little more melancholy at first. Come On, Teacher is positively lecherous. Since Plaskett has a home studio, and has been a keen home recorder, we have the advantage of him rolling tape and overdubbing at will, so his demos are full-band affairs, often as potent as The Emergency would manage.

Plaskett doesn't do a whole lot of covers, but when he does, they are classy and a bit obscure. Here we get a touching 60's folk song that could have easily been taken for autobiographical if the credits weren't included, Black Sheep Boy by Tim Hardin. And one of the famous b-sides of his career, a cover of soul great Irma Thomas's The Hurt's All Gone from 2000 also gets included, truly a career highlight production. Your purchasing options include download, or a 12-cut vinyl with a CD included, with all 20 cuts, all from Plaskett's own New Scotland Records label.
That's the review, here's a couple of choice Plaskett lines I wrote down just because I love them so much: "It isn't how you drive the car/it's how you look behind the wheel," - Money In The Bank. "I want a place named after me/is that too much to ask?" - On The Rail.
Posted by Bob Mersereau at 2:01 PM