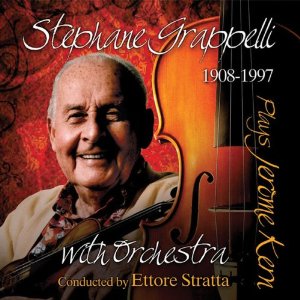 What Django Reinhardt was to hot jazz guitar, Grappelli was to the jazz violin. as partners and founders of the Quintette du Hot Club de France in the 1930's.  Both a virtuoso and a skilled improviser, Grappelli recorded hundreds of sessions as a leader, soloist, and collaborator, in a career that lasted until his death in 1997.  Along the way he partnered with everyone from Duke Ellington and Oscar Peterson to Paul Simon and mandolinist David Grisman.  This reissued set comes from later in his life, 1987, when at 79 he was still pumping out albums and seemingly hadn't lost a lick, at least in the studio.

Playing the songbook classics isn't the toughest stuff, but it can be very enjoyable, and Grappelli certainly rose to the occasion on many of the tracks.  It was a full partnership with producer and conductor Ettore Stratta, the aging violinist digging into his bag of tricks for some impressive runs, agile bow work, and above all, that beautiful tone.  With Kern's best-known songs, such as A Fine Romance and Smoke Gets In Your Eyes, Grappelli could whip away, and keep listeners impressed and engaged.

If there's a problem with the disc, it's in some of the production and arrangement.  Instead of letting these songs stay in their proper time period (and in fact, Grappelli's as well), there are modern touches that make some selections seem out of place, and touch.  Some scat vocals to accompany a couple of the songs are cheesy, some of the strings are too syrupy.  When the guitarist is allowed to play hot licks along to Grappelli, and the rest of the crew is kept at bay, we really get to enjoy his glory.  Listening to him weave his way through a lenghty version of Ol' Man River is a glorious thing, whether it was done in the 30's or the 80's.
Posted by Bob Mersereau at 4:33 PM