MUSIC REVIEW OF THE DAY: MADELEINE PEYROUX - STANDING ON THE ROOFTOP 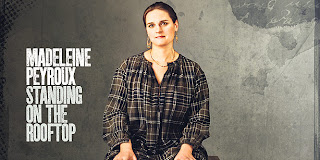 The former Paris busker has shifted significantly for this album.  For the first time in a decade she's recorded a studio album without Larry Klein, the former Joni Mitchell producer/bassist.  This time the honour goes to Craig Street, known for his work with Norah Jones, k.d. lang and  Cassandra Wilson.  But instead of easy contemporary jazz covers, she instead gone the other way, going more experimental.  I'm betting that avant-atmospheric guitarist Marc Ribot had as much to do with that new sound as anyone.

Peyroux is stretching for sure.  Although she's written some before, she's far better known for her covers, of everyone from Leonard Cohen to Hank Williams to Edith Piaf to Patsy Cline.  Usually you see a phrase comparing her to Billie Holiday in there, too.  Forget that.  The Holiday-isms are toned down, as she takes a relaxed turn at the mic, and the covers are greatly reduced, and a bit further afield.  She leads off with a surprising Beatles number, Martha My Dear, McCartney's ode to a sheepdog.  Later on, there's an equally lesser-heard Dylan number, I Threw It All Away, and instead of her usual Bessie Smith number, she switches genders to Robert Johnson.

But the real difference is all this songwriting, and the unconventional arrangements and accompaniment.  In the past she's attracted us with vocal talent and a somewhat alluring franco-flavoured sultriness.  Now it's a bit of work to hear her, and I'm not convinced there's enough writing talent to justify so many credits for her.  It's okay to be an interpreter after, especially when you do bring something new and enjoyable to the great material.  Just making your music sound different doesn't necessarily make it better though.  Apart from a fun song called Don't Pick A Fight With A Poet, the self-written numbers don't jump out.
Posted by Bob Mersereau at 7:57 PM