MUSIC REVIEW OF THE DAY: MICHAEL JEROME BROWNE - THE ROAD IS DARK 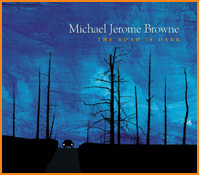 Many people try to do a vintage blues album and inject their own style into it, but it rarely works so well.  A testament to Browne's writing is that you really do have to check the liner notes to see which ones he wrote, and which ones come from the 20's, 30's and such.  Yet there's also nothing to suggest this isn't brand-new and happening music.

Mostly a solo guitar album, apart from a handful of well-chosen guests spots, Browne's full guitar sound is all the instrumentation we need.  He's a busy player in the good sense, lots of complicated picking, slides, and solos on the top strings with the rhythm on the bottom.  He finds a different great sound for each tune, using a variety of vintage instruments and amps, echo and tone a big part of it all.  Another aspect of the disc sees him following the connections between blues and bluegrass on several songs, adding old-time elements such as banjo, mandolin and a fine bluesy fiddle from Michael Ball on the 1929 cut Right Now Blues.

The covers are juicy, an obscure Flatt and Scruggs number, a J.B Lenoir I didn't know (The Whale Has Swallowed Me), and none of the usual suspects.  Plus, Browne's ability to conjure (with lyricist Bee Markus) classic-flavoured originals, such as Sinner's Plea and Graveyard Blues, makes each song on the album a discovery;  there's not a track here that feels like the same old blues everybody is doing, and that is a rare treat.

Posted by Bob Mersereau at 8:00 PM