MUSIC REVIEW OF THE DAY: SHAWN HOOK - COSMONAUT AND THE GIRL 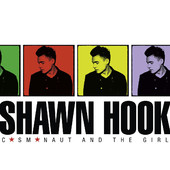 Tagged as a hot prospect half a decade ago, the B.C. native has been nurtured back and forth from Canada to L.A., working hard and crafting his songs and future.  Everything fell into place when teamed up with producer Jon Levine (Philosopher Kings, Nelly Furtado), who worked up the pop-electro sound with Hook for this debut.  It's meant to showcase his fine voice and songwriting talents, but the dance beats are very big, noticeably on first single, Every Red Light.  But at its heart this is happy pop music; that's where you gotta go these days for Top 40, big programmed productions that almost overwhelm the song.

He certainly has the voice and range, able to leap the highest falsetto without an autotune in sight.  There's a sincere heart here as well, somebody who wants to write and sing and perform, and that's obvious from his video and TV hits.  On the songwriting front, on the plus side, he's a fountain of ideas, and hardly any of the usual boy-girl tumult.  Instead, he goes for topics such as his sci-fi, with lead track Planet Earth giving us the album title.  Rockstaria, with a darker vibe and techno beats, is a clever take on a girlfriend who makes him feel like he's the biggest star on the planet.   Plus, it has all these aria elements in it, altogether a big piece of theatre.  Middle Finger, the toughest track here, recalls The Cars, and is his manifesto, advising everybody to go for it, especially in the face of doubters.

The beats are endless though.  Every one of the ten cuts explodes with heavy thumps, not giving us a break.  That is, until the bonus cut, that old classic, the acoustic version.  In this case, it's just the voice and piano take of Every Red Light, and that's when Hook finally feels exposed to the listener.  It's a nice, simple pop tune, showcasing his strengths as a singer-songwriter, and maybe his future, after the dance.
Posted by Bob Mersereau at 6:52 PM