MUSIC REVIEW OF THE DAY: CASSANDRA WILSON - ANOTHER COUNTRY 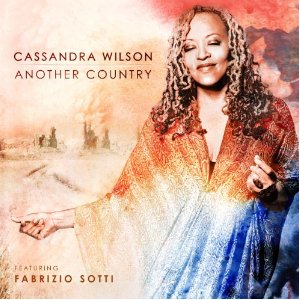 One of the few actual stars in jazz these days, a name many recognize, and lots actually buy, plus she still has peer respect in the notoriously tight community.  Her latest sees her in excellent form, and even doing all original material, except for one.  It's a different album to be sure; there is a lot of guitar here, with two instrumentals, and there's an Italian feel through the whole disc.  That's because it features the guitarist Fabrizio Sotti, as co-producer, often co-writer, and the composer and only performer on those instrumentals.  Such is the collaboration that Sotti's name appears on the cover as well, given a "featuring" credit.

The songs were recorded in Florence, Italy, using local players, and the touches of the area, including accordion on most of the numbers.  Sotti's acoustic is the dominate instrument, and Wilson's voice rises to the occasion, her natural warmth a fine mix with the softness of the Italian musicians.  Of course, as we are in Italy, the songs are romantic, but not lush; Wilson's words never fall into the trap of being dramatic.  Smartly, it is a mix of her modern, North American style, and the Italian way.

The two linking instrumentals are a great idea, especially for a vocalist's album, and helps enhance the travelogue feel of the disc.  Also, that chestnut O Sole Mio (you know, what Elvis sang as It's Now Or Never), perhaps the best-known traditional Italian song is trotted out, but instead of the bombast often used by the dramatic Italians (and the imitators), Wilson keeps it cool and moody.  It's a very smart departure for Wilson, and a soothing treat.
Posted by Bob Mersereau at 9:58 PM