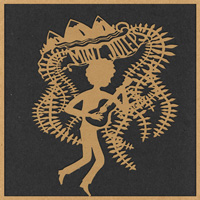 Fisher's as stripped down as can be here, an acoustic album with uke, mandolin, double bass, woody percussion and banjo, nothing electric.  It fits his singalong, catchy numbers just fine, of which there are five originals.  The rest are covers of famous songwriters he loves, although they are somewhat obscure numbers.  And all but two are Canadian writers, which is a classy move.  Lightfoot is here, but its a very early, 1966 single Spin Spin.  The youngster shows great taste, and fine knowledge of past masters, including songs by Gene MacLellan (If It's Alright With You) and Murray McLauchlan (Highway One).  There's room for later stuff too, including a Ron "Lowest Of The Low" Hawkins number.  The closest thing to a known hit is one from Quebec, from the mercurial Jean Leloup, his I Lost My Baby.  Even his John Hiatt cover is a hardly-heard gem, Gone.

They are all favourites of his, taken from his live show, and Fisher wanted to capture the feeling of what he does night after night on the road.  A veteran yet still a relative kid, he's obviously taken with the folk and singer-songwriter traditions, and living up to those ideals.  The first time I ever met him, he was biking his way across North America, choosing to promote his first album in the healthiest way possible.  It's great to see he's still living that way; one of the new tunes here is Built To Last, espousing the joys of two-wheels-good, in a metaphor for rolling through life.

Sitting your own tunes on a disc surrounded by such first-class names is a gamble.  It can point out the weaknesses in a lesser writer.  That ain't Fisher.  Not only do his own songs live up to the quality of the others, he also makes the covers his own, keeping a relaxed and confident pace through the disc.  And with the somewhat unfamiliar list of songs here, I bet lots couldn't tell the difference between his and theirs.
Posted by Bob Mersereau at 5:45 PM