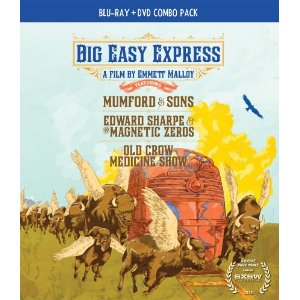 No matter how the times change, there's always been a romantic notion to crossing America, even for those who have to do it for a living.  Touring musicians, once they reach a certain level, are faced with the prospect of yet another slog by van, bus, or if they are rich enough, plane.  There's not too much romance in that, but the train, well, now that's something cool.  Hopping on board for that idea were a trio of neo-folk acts, Old Crow Medicine Show, Edward Sharpe and the Magnetic Zeros, and England's Mumford & Sons.  They got a vintage train, a movie crew, and went on a trek from Oakland to New Orleans, stopping off at several cities for concerts.  All told, it took 160 people, from crew to family to train workers, but what the hell, it was as close to living the old dream as they could get.

This is the result, a film debuted at SXSW this past spring, winning the Audience Award.  We get to see all three bands in concert settings, playing stages set up by the train stations.  But much of the film is devoted to the interaction on board, as the bands speak about how well they mesh on this voyage, musically and personally.  Well, duh, they are all big old-time fans, thrilled as heck to dig out the fiddles and accordians and jam until late morning.  As much as the crowds no doubt loved their stops, the real party was happening while the wheels were rolling underneath.

When I say party, I just mean musically.  Unlike the legendary Festival Express train tour of Canada in 1970, with The Band, The Dead, Janis Joplin and others, there's no sign of booze and drugs, and the joy is all in the experience.  Surprisingly, it doesn't feel contrived, either.  Your mom might find them all nice young hippie kids, especially those clean-cut Brits in Mumford.  Musically they come out on top, followed closely by Old Crow.  I still haven't figured out the appeal of Sharpe and the Zeros, other than its music you can jump around to.  He can't sing, and is just kind of freaky. I think the 10-piece group and followers are some kind of feel-good cult.  No matter, Mumford's coming back on.

One of the best moments comes when the Mumford guys stop by a high school, to check in with a marching band that's set to join them on stage that night.  That's always cute, but in this case, the big band treats them to something extra, playing them one of their set pieces, complete with swinging trombone choreography.  The Mumford members then proceed to join the band in the gymnasium, tapping on the big drums, and grooving to these kids.  It's a behind-the-scenes moment you usually don't know about.

Yes, some of the on-train folk jams are a little precious, but since there are so many talented folk players there, and they are obviously having a grand time, you can forgive it.  Then, seeing the footage of the groups joining each other on stage each show, dumping the old showbiz hierarchy of opening and closing acts, and instead enjoying their new bond, you realize that maybe their is something magic about the train.  The whole trip looked like a ball.  Although, I'm glad you can't smell those Zeros, I don't think they bathed.
Posted by Bob Mersereau at 10:09 PM