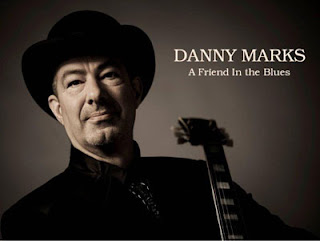 Marks is being modest here.  I'd say he's more a best friend of the blues, with over four decades of performing, broadcasting, and living the blues in Toronto.  He's also one of those that simply loves it all, and with his great talent on guitar, can play it all too.  He can be found on the Jazz-FM channel every Saturday night, and next year starts hosting the TV show Cities In Blue for Hi Fi TV.

With all that playing and yacking, he hasn't recorded his own stuff that often, with this just his fourth solo disc.  No surprise that he had a few songs stored up then, the album featuring 12 originals.  And while he may be a friend of the blues, he's also more than a passing acquaintance of country, gospel, and folk.  That Lonesome Valley sounds like something The Statler Brothers might have worked up.  Mostly Marks takes his cues from 40's, 50's, and 60's sounds.  Blues Party Tonight is a jump blues with swagger, and Blues For Lonnie Johnson is his tribute to the slinger he saw as a teen in Toronto.

There's no showing off here, no "look at me, I'm Stevie Ray" moments, in fact none of that kind of modern electric stuff.  This is about the song first, and the expertise is in playing it well as a group.  Marks may not be the best vocalist, but it's a player's album really.  The sound is tremendously clean on all the instruments, and Marks sounds the best in the folk-blues style, as a story-teller.

He's also going to be one of the guests performing in Toronto's annual Patsy Cline tribute concert, now in its seventh year.  Organized by singer and Patsy fan Heather Morgan, the show brings together all sorts of artists inspired by the woman some consider the greatest of all country singers.  This year features Mary Margaret O'Hara, Lori Yates, Russell deCarle of Prairie Oyster, Paul Reddick and a host of others, at the Lula Lounge on Thursday, Sept. 6th.  Hey, I'm finally going to see it, after years of wishing and promising.  Gee, I wonder if anyone will sing Crazy?
Posted by Bob Mersereau at 7:16 PM