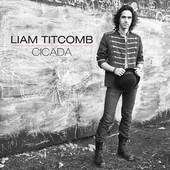 Cicadas are bugs that return in cycles, as long as 17 years, and Titcomb took inspiration from that idea for this, his third disc.  He sees it as a return of sorts, or at least a new cycle.  Now, most 25-year old singers would see themselves at the start of a journey, but Titcomb's been at it 10 years, his first disc coming back then, spied as a talent-in-the-making.   So he's already seen some highs and lows, and this disc saw him step back, start over and take some serious time thinking and writing.

It does feel like a re-invention, or least a serious upgrade in the songwriting.  These are moody and mysterious love songs, tight and focused, with memorable melodies, sing-along choruses, but nothing light-weight.  You get the feeling the tunes were worked on, but in the right way, stripping away anything unnecessary until the core was reached.  That goes for the music too, as the production uses just the right amount of instruments, built on acoustic guitar, bass and drums, with flourishes dropped in as strong touches, such as banjo licks, organ lines and lots of layered vocals.  Titcomb's an excellent singer, with a voice that's full of emotion, and he has both a low and high range, making for great doubled vocals and harmony lines.  This is particularly strong on the cut Landslide, the one that started this turn of writing, about the end of a serious relationship, and it's certainly powerful.

It's not all heavy though.  First single Love Don't Let Me Down is affirmative and up, and Games has a big groove, so the guy isn't hurting.  This isn't James Blunt territory, it's serious study of love, and filled with hooks.  Blunt would make it sappy, Cicada is more in line with Neil Finn or Jakob Dylan.
Posted by Bob Mersereau at 5:13 PM