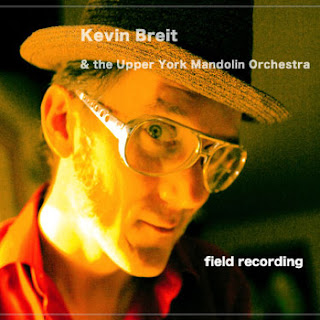 Kevin Breit is one of the most revered guitar players working today, on call to such folks as Norah Jones, k.d. lang, Holly Cole, and half of Canada.  He's also one of the most experimental fellows around, happy to record and perform in any roots genre, from jazz to blues to folk, and he always has about five different collaborations and groups going at once.  I knew all this.  But this one, well, it threw me for a loop, and in the best possible way.

Here he's teamed up with, yes, a mandolin orchestra, featuring 13 string pluckers on mandolins, mandocellos and mandolas.  No guitars, no drums, just a double bass, and vocals.  So.. how is it?  How about eclectic, eccentric, brilliant.  With a ocean of mando-things behind him, Breit croons through a variety of folk, blues, tall tales, emotional loveliness, unlike anything you can imagine, really.  Hearing the orchestra strum in triple-time, with harmonies being played by each section, sweet lead lines picked out, is a thrill on each song.  Great waves of strings come cascading in, then back off, all underpinned by the rich bass.  And there's more power in the combination of all here, along with Breit's rough-and-ready voice, then any power trio can put out

Then, there are the songs themselves, grand stories concocted by Breit, never straightforward, sometimes downright mysterious.  King Kong Strut is some sort of crazy klezmer shaggy dog tale, this album's The Weight, full of odd characters, and a great, singalong powerhouse.  Big Bill Broonzy has the titular folk-blues hero in the tale, but it's more than a bio, there's a mysterious love story here, too.  Meanwhile, the meticulously-arranged breaks see nasty mandolin licks for solos, with the other players filling in with climbing, off-kilter chords rising and falling, somewhere between folk and classical.  The title track is about a particularly nasty family, and possibly the first all-mandolin murder ballad.  I think, I'm not sure that anyone dies here, but it's folk-noir.

Seriously, they really should just forget the voting, and start throwing awards and accolades at this disc.  The songs alone are worth that, never mind the fact that its ALL MANDOLINS.  The only person that comes to mind for this level of inventiveness is Ry Cooder, and I  mean that as the highest praise.  I couldn't love this more.
Posted by Bob Mersereau at 9:34 PM