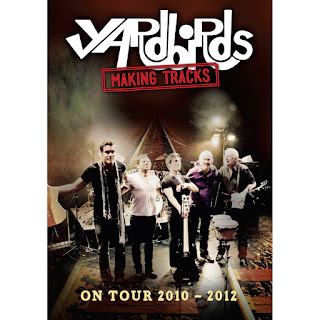 Imagine, if you will, that music history, music fate even, was a bit different.  Picture The Who, only instead of Keith Moon and John Entwistle having passed prematurely, it was Roger and Pete no longer with us.  And the other two, bass and drums, were still out touring with the name, bringing Quadrophenia to a theatre near you this winter.  Or, let's say the rest of the Stones had packed it in, and instead, the 50th anniversary band was lead by Charlie and Bill, and a bunch of recent, young, faceless recruits.  Think it would be still be exciting?

So with that in mind, lets look at another great beat group from the London 60's scene, The Yardbirds.  They are most famous for the trio of guitar gods that went through their ranks; Clapton, Beck and Page.  By 1968, the band was dead, last man standing Page deciding The New Yardbirds was a dumb name, opting for Led Zeppelin instead.  That left the Yardbirds franchise unused, and decades later, the drummer and the bass player took up the mantle again.  Shades of Bill and Charlie, Keith and John!  It's McCarty and Dreja, hardly famous names to the average rock fan.  Of course, the average rock fan only knows The Yardbirds as the former home of those guitar heroes, and probably couldn't name a single Yardbirds song.

That seems to be just fine to Dreja and McCarty.  They aren't trying to play the O2 Arena with this version of the band, and are very happy to be playing to a few hundred, the ones who do know the old songs, and appreciate some good blues in a live setting.  This double-DVD set is certainly not a flashy, multi-camera live show.  It's shot at outdoors festival stages, clubs and the like, with disc two a short tour documentary, where mostly Dreja and McCarty talk about how much better it is touring these days, what with hotel rooms and nights off and such, compared to the 12-hour daily slogs the band used to do, never taking a break.  Meantime, they're still driving in a passenger van.

The big question is whether this version of the band can entertain old fans and those attracted to the famous name.  All eyes would, naturally, be on whoever gets the guitar post.  And really, hats off to kid Ben King, still in his early 20's on these tracks, and handling himself very well.  He rips off some fiery solos, replicates the best-known licks of his pedigreed predecessors, and just about everything you could ask for, save, you know, Jeff Beck.  Whew!  Hey, this might be alright, huh?

Well, sorry.  Where the band falls down is replacing that other key member, lead singer Keith Relf.  He died from electrocution in 1976, and is sorely missed here.  Andy Mitchell is another youngster the founding members have chosen, but unlike their inspired choice in King, Mitchell doesn't fit the bill.  He has little charisma, and not much personality in his vocals, either.  And since the bulk of the set is made up of old Yardbirds numbers, such as Heartful Of Soul, Shapes Of Things, For Your Love and The Nazz Are Blue, you really miss the power Relf brought to them.

It's too bad, because when they are playing, this is a pretty exciting blues band.  It may be that the second class audio mix is unduly hurting the singer, and I'd still go see them at a festival, as word has it they put on a fine set.  One of the new songs McCarty wrote, Crying Out For Love, is pretty good too, a fine return to 60's-sounding Brit R'n'B.  But Mitchell makes them seem more like a bar band than a mainstage act, especially one that's in the Rock and Roll Hall Of Fame.
Posted by Bob Mersereau at 8:07 PM