MUSIC REVIEW OF THE DAY: MUMFORD & SONS - BABEL - GENTLEMEN OF THE ROAD EDITION 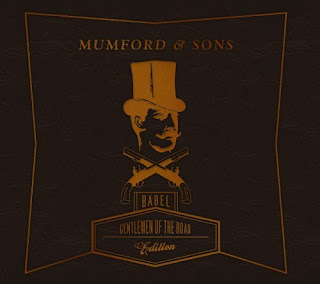 This is a deluxe version of the huge hit Babel album, now featuring a live component of the big tour they made to accompany the release.  Back in August, I had friends who made the trek to Portland, Maine, to see the nearest show to these parts.  At the time, the album had yet to be released, but they came back ecstatic with the new songs, and the whole tour idea.

The Gentlemen of the Road idea was to hold a one-day festival featuring bands Mumford would enjoy seeing, hanging out with, and jamming with, such as Dawes.  Nothing much more really, except good, all-day vibes.  Now we get this sampler of the tour, along with the original Babel disc.  It now includes an extra audio disc, Live At Red Rocks, and a separate DVD, which is again the Red Rocks concert, but as part of a documentary about the tour.  That one includes some brief interview clips about the tour concept, some scenic footage of Red Rocks, some crowd interviews, and best of all, a good five-minute montage of tour bands and uber-fans, plus scenics of none other than Portland, Maine.  Couldn't see my friends though.

Funny, I get a weird vibe from seeing the group play, they are awfully earnest an a little too into it.  Up close with the camera, it's all a tad too hippie at times, 'look at us, we're groovin' with these acoustic instruments, man.'  Given that they are pretty much still doing the same sound as their first album, I'm still trying to decide if they are here for a good time but not a long time.  Now, I can enjoy the CD of the concert much more, because the group's epic sound does come across well, and I'm not looking at them being so into themselves.  Still, I'm having a hard time remembering which songs were on the first album, and which are on the second, and sometimes I can't tell them apart at all, not a good sign.  But I think it's always a fun thing for fans to have a tour edition/souvenir, so I'm not going to quibble too much.

Now, my bonus extra, a Review of the Day deluxe edition, here's my original review of the Babel album from last fall:


Mumford & Sons made a big splash with their debut, Sigh No More, crafting a unique sound that combined folk instruments with big, epic chords and a rock beat.  All you really need to know is that big sound is back with Babel.  Acoustic guitars are strummed with ferocity.  The banjo is plucked close to the point of breaking strings, in machine gun fashion.  Drums and bass pound and thud, to create that huge presence.  Singer Marcus Mumford bellows above it all.  Those are the louder ones, anyway.  First single I Will Wait is a perfect example, a fine song but one that has already become so well known in a few weeks that I keep forgetting if it's on the new album or the first one.  It is awfully similar to other ones on that disc.

It's actually the middle part of the new album that reveals the most about the band, and Mumford's songwriting.  There are a group of ballads in a row that let us here more than just the banjo and acoustics at full volume.  There are nice harmonies and a subtle mix of other instruments.  Strings and horns get added in, and the lyrics are bigger stories, with a touch of the mystic.  Yet even these get a little overwrought in the closing minute, as the group falls for the trap that making the song louder in some way makes it more important.  Don't get me wrong, they do it well, and it makes for some exciting listening, but we've now had two albums with the same style being repeated.

It still has some pretty stunning songs though.  Both Hopeless Wanderer and Broken Crown are full of drama and tension, with the intensity building throughout.  Yet the banjo and the vocal also add in a certain bit of joy, so that the end result is exhilaration.  It's no wonder the band is such a popular live act right now.

You have two choices for Babel, the basic edition, or the deluxe which adds three tracks.  Hmm, there's a five buck difference for that privilege, at least at Amazon.ca, which seems steep, $12.99 or $17.99.  The big draw of the extra three is the group's cover of The Boxer, which they do with Paul Simon, although you'd never know the author is there unless you read the credits.  Actually, I like the cut For Those Below better, because it's one of the rare, non-bombastic tracks they do.

Posted by Bob Mersereau at 2:38 PM