MUSIC REVIEW OF THE DAY: JONI MITCHELL - LOVE HAS MANY FACES 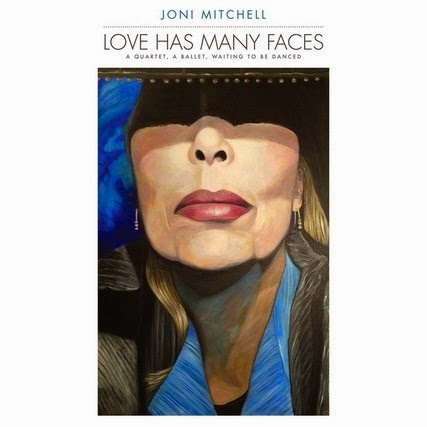 Joni Mitchell didn't set out to create this new boxed set.  There was no request for a best of or rare tracks collection.  Instead, she was working on a dance score, for the Alberta Ballet.  The concept was to be about love, or the lack of it, and would feature selections of her material that spoke to it.  The trouble for Mitchell was, lots of her music from 1965 on spoke to it.  She went through it all, and found lots and lots, hours worth, much more than was needed.  Try as she might, she couldn't seem to make it flow as a piece when she chopped it down.  Eventually, she abandoned the ballet request, unable to satisfy her goals with the project.
That left the work she had already done, assembling roughly four hours of her songs into four acts.  As a painter, she always finds a visual element to her work (she calls herself a painter who writes songs), and she "sees" a connection in the chosen lyrics and music, one that runs through her whole career.  So what we get are these segments of her work, the ones that best describe four lines of thought on love.
Act 1 (the first disc) is subtitled Birth Of Rock 'N' Roll Days, something that has always been used as a joyous time in Mitchell's awakening days.  She loves to dance, and has often gone back to late 50's rock 'n' roll to find that spark of liberation.  Whether played on the radio or at record hops, it's lighthearted sometimes (You Turn Me On, I'm A Radio), nostalgic (Chinese Cafe/Unchained Melody), and in Mitchell's ballet, about young women encountering the forbidden.  River is here, Car On A Hill, Come In From The Cold.
Act 2 is her look at darkness in the world, in the story she is developing, called The Light Is Hard To Find. There is hope, and a light that cuts through, bringing the possibility of love.  Court And Spark starts the set, but the bulk of the tracks are from later albums, and not the best-known cuts at that.  That makes sense, as she has often focused on the woes of the world in more recent times.  Nothing Can Be Done comes from Night Ride Home, Not To Blame from Turbulent Indigo, The Wolf That Lives In Lindsey from Mingus.

Act 3 is Love Has Many Faces, where she looks at love from both sides now; well, from lots of sides, giddy to troubled.  Carey is here, and All I Want, both from Blue.  Two cuts from Taming The Tiger provides two topical numbers, The Crazy Cries Of Love and Love Puts On A New Face.  A Strange Boy is from Hejira.

Mitchell's final act is called If You Want Me I'll Be In The Bar, where her characters and all the facets of love wander through.   We hear God Must Be A Boogie Man, The Last Time I Saw Richard, Amelia, A Case Of You, and Raised On Robbery, lots of her best characters and scenes.

Much of the pleasure listening through to this set is hearing the links between the songs.  Some are seamless, like a great mixtape.  Others are in the lyrics, and the mood.  Several of the songs aren't the original versions, but rather the new versions created with an orchestra, featured on her Travelogue and Both Sides Now albums. It is not a simplistic collection, aimed at pleasing the average or casual fan, with most of her hits not included. This requires some thinking, but ultimately it is more rewarding than the usual four disc set.  However, I'd still like to see a normal one someday, with the unreleased stuff and all.
Posted by Bob Mersereau at 7:17 PM