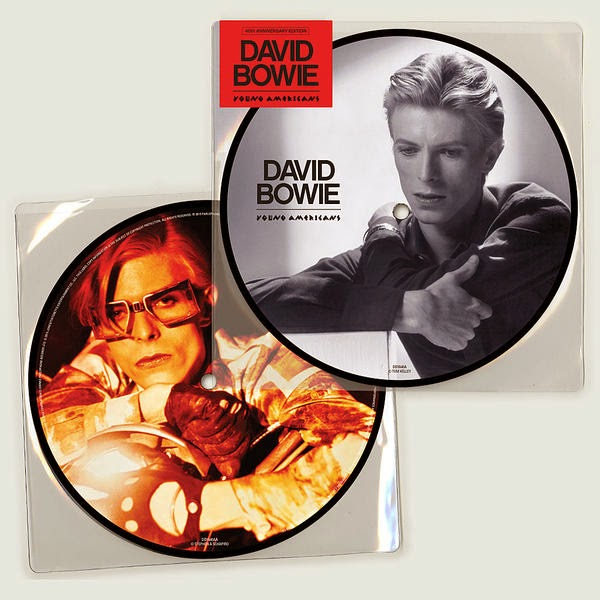 It's forty years?  Seriously, that thump was the sound of my jaw dropping and hitting the desk.  Young Americans still sounds as funky and modern as the day it came out, and here gets honoured with a 7-inch picture disc, the latest in the on-going anniversary releases of Bowie 45's.  As before, it's a wonderful picture, an out-take of the later ChangesOneBowie photo shoot.  On the B-side, we get a somewhat rare track, It's Gonna Be Me, which was an out-take from the Young Americans album session, a version found on the 2007 reissue, with strings added.  Collectors will already have it, which bugs me, because why not include something collectors don't have, since they are the primary audience for this.  I gripe.

As for Young Americans, this was a sea change for Bowie.  He was on the road, touring his latest sci-fi rock epic, Diamond Dogs, an album based largely on George Orwell's 1984.  It was a huge, ambitious tour, but part-way through, he became enamored with a totally different sound, the sleek soul music that was happening on radio and in clubs across the U.S., especially the Philly Soul of The O'Jays, The Spinners, Gamble & Huff, Thom Bell, etc.  In the middle of the tour, the big Diamond Dogs sets were gone, new soulful players were introduced, and the set list changed to include the early Young Americans, cover versions and a whole new Bowie.  The difference between the Diamond Dogs and Young Americans albums was night and day, the end of the Ziggy era and glam rock, the start of a smoother, more musically-experimental side that kept advancing right through to Scary Monsters.  At the same time, it was his most popular period, resulting in the #1 single Fame, and he would return to those sounds for his other commercial success, Let's Dance.

Oh, another somewhat rare version graces the A side.  It's the single edit, what often got played on the radio back in 1975, shortened down from the five minute album cut.  Only this one is a 2007 remix of the edit, done by producer Tony Visconti, for you completists.  But the whole point is these are just nice to have, the whole series looks great.
Posted by Bob Mersereau at 11:26 AM