MUSIC REVIEW OF THE DAY: THE METERS - FIRE ON THE BAYOU 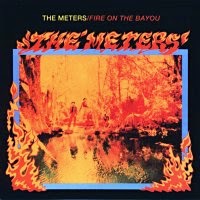 There's an unbeatable team on this 1975 classic.  The Meters are simply one of the best bands ever, New Orleans or anywhere, masters of tight funk.  Here they are produced by the master himself, Allen Toussaint, with horn arrangements from Wardell Quezergue.  It's being re-issued in a series called Funk Classics, in garish and fun orange and red splattered vinyl.

The thing is, it's not all funk.  Oh my yes, they can do that, but here it's more under control, tastes of it but not full-on.  Instead, The Meters were making a more commercial album, and it's a showcase of all their abilities.  There's the sweet soul of You're A Friend Of Mine, the Jungle Book fun of They All Ask'd About You, the Latin grooves of Lair, and even some fine jazzy, George Benson guitar in Middle of the Road.

In all that mix, The Meters also advanced the new sound of New Orleans, something still reverberating around the city and the globe.  Singing about their neighbourhoods, all the great traditions, using the accents and attitudes, and capturing some of the old rhythms and second-line sounds, they found a new groove in songs such as Mardi Gras Mambo and Talkin' 'Bout New Orleans.  This band could do no wrong.
Posted by Bob Mersereau at 11:58 AM