MUSIC REVIEW OF THE DAY: BRETT KISSEL - PICK ME UP 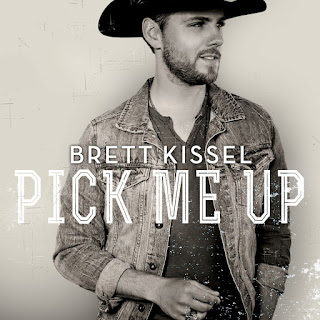 Good timing for the rising Alberta country star. He releases his second major-label album today, Sept. 11, at the same time he's at the CCMA Awards in Halifax, as one of the leading lights. He's up for four awards, including Male Vocalist and Single of the Year, capping off a couple of stellar years that has seen him win over a national audience on radio, video and in concert as a headliner.


Maybe he's been too busy. What Kissel has going for him over most country newcomers is legitimacy. He's actually from the country, actually from a cattle ranch, and has actually been singing and loving real country music since he was very young. I want to hear more of him, his thoughts and stories, and unfortunately, there's not much of his writing here. Only three of the ten cuts feature him among the co-writers, the rest coming from the usual big songwriting factories that make artists sound the same as the next hat on the radio.


Kissel has hit chops all over his material, including the current and climbing single Airwaves, an old-school number that celebrates the magic of radio. It may be slightly retro, but Kissel is helping the sound move away from the contentious bro country trend, back to more of a '90's feel. In one of his own numbers, Cool With That, he even mentions a George Strait mixtape. I don't think jean shorts and pick-up trucks appear anywhere. However, on Feet Back on The Ground, both mom and apple pie show up, a bit too cliche.


However, on that song, Kissel shows how well he does on the emotional numbers, the topic being a son coming to appreciate his mother after trying desperately to get away in his younger days. There's a solid balance between the good time numbers and more thoughtful ones, again showing he has more depth than many others. Next time, hopefully he'll get to show more.
Posted by Bob Mersereau at 11:13 AM