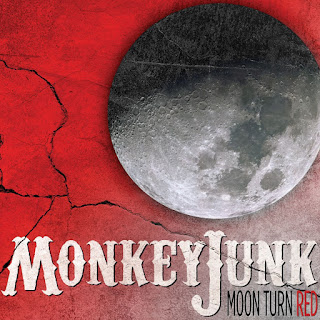 Hey, did you catch that super moon Sunday night?  It looked pretty cool, turning red in the eclipse and all that.  Now, how far in advance did MonkeyJunk know about this thing, timing the release of their latest album, Moon Turn Red, to last Friday, just two days before the event?  I'm thinking freaky coincidence.

For their fourth, Ottawa's M-Junk grooves a bit more, rocks a bit more.  Taking a cue from '70's bands, the band struts through a set of arena-sized numbers, lead singer Steve Marriner channeling his inner Paul Rodgers.  Meanwhile Tony D gets to blast out saucy lines and even play guitar hero on numbers such as Show Me Yours, with its middle-section solo and funky little accents throughout.  There's no time for a slow blues at this party.

The group plays homage to a Canadian guitar icon, covering David Wilcox's Hot Hot Papa, with the man himself sitting in for solos and a vocal verse, putting the fun in funk.  To mix things up, there's a bit of reggae in Love Attack, with its universal empowerment lyrics classic Marley.  Learn How To Live is the slow one, but still has a dark streak throughout it, no sappy love ballad.  Marriner pours his heart into it, proving himself up for the job on this soul number with punch.  But the core of the set are the album blues rock numbers, which sound like they could have come from your local FM station sometime after 10 PM back in 1976, when the DJ's could get heavier.  Check out Live Another Day, with its twin guitar line, pounding drums from Matt Sobb,  and tense delivery, it's exciting and dramatic and tough all over, like the bulk of the disc.
Posted by Bob Mersereau at 11:25 AM