MUSIC REVIEW OF THE DAY: MANITOBA HAL - LIVE IN GHENT 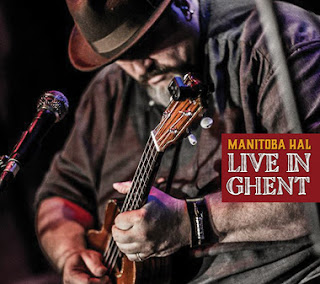 For all those (me included) who complain that too many blues players who do the old stuff sound the same, here's a guy doing it all his own way. Manitoba Hal may do a bunch of Robert Johnson in his live set, plus Baby Please Don't Go, St .James Infirmary and The Thrill Is Gone, but you haven't heard them like this. Hal's main ax is the ukulele, and we're not talking happy Hawaiian sounds. Instead, he's doing mean blues riffs, and the result is a higher but still nasty tone, a rich ring that fits the classics just fine. Then, he thickens it up more but using looping gear to repeating bass lines, etc.


The end result is a set of attention-holding numbers, a mix of the well-known (Sweet Home Chicago, Who Do You Love, some Mississippi John Hurt) and his spicy originals. This two-disc set comes from a show last year in a Belgium club, recorded on a European tour where Hal (Mr. Manitoba?) proves himself a machine, going from one high-energy number to the next, exuding a lot of warmth while offering plenty of whiz-bang licks. It's a strong twist on the acoustic blues tradition.
Posted by Bob Mersereau at 11:31 AM