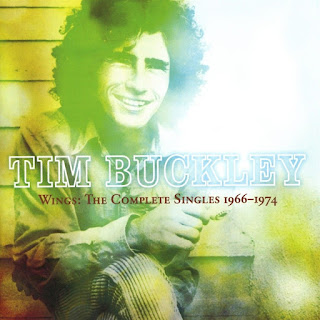 Impossible to categorize, the hippy songwriter, and father to Jeff had exactly no hit singles, so this collection of his A and B-sides over his ten-year career seems an odd idea. But as compilations go, it is a pretty interesting way to hear him, and truth be told, he could be pretty catchy, especially for an avant-garde folk/jazz/soul/funk crooner.


Initially signed to Jac Holzman's ground-breaking Elektra label, it was a perfect match of ideologies, with Elektra willing to bankroll experiments, and Buckley inspired by the open season that was the mid-60's. Wings was a strong debut single, and predicted the rise of the singer-songwriters in a few years. The guy was deep. From a time when it was cool to write sad songs, he was one of the heaviest.


Buckley went through a few phases, including experimental jazz/rock that left his fans confused. Under pressure to record hits, he would craft singles that were, in his mind, parodies of pop music, but were actually quite good. Luckily, his long-time friend and lyricist Larry Beckett is on hand here to provide insight into this in the liner notes. Several singles came out from the last three albums of his career, when he was in a pop/soul phase, which Beckett explains was Buckley being consciously over the top. The thing was, he could do that sound just fine.


Too little, too late of course, and as fans know, he died in 1975 from an accidental heroin overdose, being experimental and reckless just as he was with his music. The big excitement here is the first-ever release of a shelved b-side from his early career, called Lady Give Me Your Key, a fine cut that was another example of Buckley trying to write a pop hit on demand for his label, with lots of wink-wink drug references. It's the ultimate tribute for the ultimate cult artist, a greatest hits set for someone without a hit.
Posted by Bob Mersereau at 8:16 PM