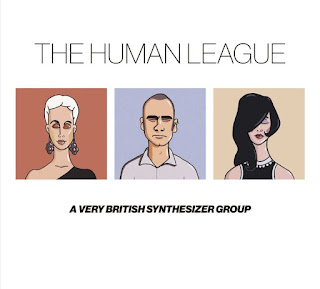 Has there ever been a luckier band? For almost 40 years, this group has basically been a guy who can't play an instrument, and two women he met dancing in a club, who can barely sing. The sound the group is known for was inspired by people who formed and then quickly left the group, and a subsequent producer who polished it up into something genre-busting, and then he buggered off as well. Yet The Human League, comprised of Phil Oakey, Susan Sulley and Joanne Catherall, are considered one of the ground-breaking synth bands, and perhaps the biggest synth-pop act ever.


You have to hand it to them though, especially Oakey. He certainly stuck to his guns, and played his cards to the maximum of his talents. More importantly, he had the idea and plan, and has never claimed to be anything more than a decent singer in a simple band. He was part of an initial wave of British acts that saw that old-tech synths could be used by even non-musicians to create songs, one note at a time. Inspired by Germany's Kraftwerk and Bowie's Low, he wanted to take those sounds onto Top Of The Pops, and realised being a star was more about attitude and fashion.


After Oakey's initial, more musical bandmates quit to go further out into synths (eventually becoming Heaven 17), Oakey did in fact meet the other two dancing at a club in their hometown of Sheffield. They looked right. Meantime, his record label, Virgin, was suddenly stuck with the remains of a one-promising act. So they recruited Martin Rushent, a producer who also wanted to make big-sounding synth music. With Rushent's impressive studio talents, they came up with the glossy, insanely catchy album Dare in 1981, which immediately started to produce those hits. There was The Sound of the Crowd, Love Action, Open Your Heart, and finally, Don't You Want Me, which amazingly even gave them a #1 single in Canada and the U.S. Heady times indeed in the North American music scene, as strange haircuts and that dance the two women did, standing still but swinging their arms up high to the beat became acceptable instead of weird. Within months, Culture Club and A Flock Of Seagulls were getting big hits too, because of colourful looks and catchy pop songs.


The Human League did keep to the plot though, which was making great-sounding, electronically based music. That's not to say the group didn't have lots of help along the way, from musicians that came and went, and producers that did most of the work. The group's other #1, 1986's Human (also a gold single in Canada), was written, produced and completely played by hot-shot producers Jimmy Jam and Terry Lewis, with Oakey's only involvement doing the vocal, and that took a month. But Oakey could write too, and there is a pretty impressive list of hits over the years (The Lebanon, Tell Me When, Mirror Man), although nothing even in England since the new millennium.


Three discs in this box set is stretching it a bit for this group, especially since the third is completely made up of early, working versions of these songs, and synth groups don't sound that different from demo to finished version. And even early on, most fans got excited about seeing the band's latest video or TV appearance to find out what the girls were wearing or what Oakey's latest haircut would be, as is pointed out in the liner notes. What's most fun here is the four disc, a DVD that collects their videos, and their many BBC appearances, a whopping 46 cuts in all. They did, and still do have some nifty outfits and wild hair. The songs are still catchy, if lightweight, but that was always the point. They were lucky, they knew it, but they were clever too.
Posted by Bob Mersereau at 5:30 PM