MUSIC REVIEW OF THE DAY: NEIL YOUNG - AFTER THE GOLD RUSH 50th ANNIVERSARY 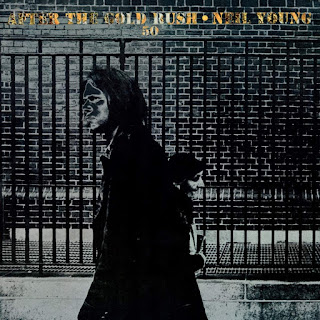 So Young's long-delayed second volume of his archives series has finally arrived, albeit only for super deluxe, website orders right now. The retail edition comes in the spring, in a cheaper, less deluxe box. That should be enough, 10 cd's of classic and unreleased material, from 1972 - 1976, right? Right?
Of course not. There are anniversaries to honour as well. This is the 50th birthday for the classic After The Gold Rush, one of the very best sets in his career. It featured a hybrid group of Crazy Horse players (Danny Whitten, Ralph Molina), CSNY types (Stills, bassist Greg Reeves) and wild cards (Jack Nitzsche, Nils Lofgren). It was a purple patch for great songwriting from Young, coming off the huge success of CSNY's Deja Vu, and about to blow the roof off with his Harvest album. This album had a grand mix of folkie acoustic ("Tell Me Why," "Birds") and sizzling electric ("Southern Man," "When You Dance I Can Really Love") plus of course, the immortal title cut, a sci-fi anthem.
The carrot for buying this version of the album is the addition of two cuts. They are both of the same song, very different versions of the delightful trifle "Wonderin'." That was a song Young cut several times, trying to find a home and arrangement for it, and was an acoustic concert favourite. It finally did get put out on the rockabilly-styled Everybody's Rockin' in 1983, but like the rest of the album, it was done as a cheesy throwaway. Here we get the original folkie-styled version with Crazy Horse that could have fit on After The Gold Rush, which first appeared on his first Archives box, and an out-take that makes it more country, with Lofgren on the session. This newly-found second version has never been released, so it's a bonus for collectors and fans.
Speaking of Young's archives, the real goldmine can be found on his website, www.NeilYoungArchives.com, which is a fan site you have to subscribe to, 20 bucks a year. Young has now made it completely free for the rest of December, so you can stream all his music in Hi-Res, including the new Archives box, and also get exclusive concert films, videos, and all sorts of info and mayhem. It's truly worth it just for the reading and instant access to the tons and tons of material you won't get on Spotify.
Posted by Bob Mersereau at 11:53 AM