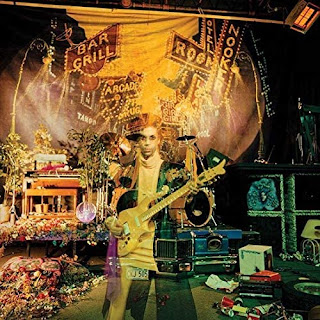 This has been a banner year for boxed sets and super deluxe reissues. For so-called heritage artists, even the biggest names, it's become one of the only sure-fire ways to sell physical products. For record labels, the deluxe packaging means bigger price tags. And they sell themselves, based on long-standing artist support among fans and collectors. Artists such as  The Rolling Stones and Paul McCartney now sell super deluxe versions of middling catalogue albums like Goats Head Soup and Flaming Pie for $150 - $250, a far cry from the $3.99 or so consumers first shelled out for them.
If you're paying out that kind of money, you want value and volume. Vinyl is nice, so are great big books and informative notes. I'm not a fan of photos and trinkets, and I could care less about posters and postcards. Give me extra cuts, out-takes, unreleased live shows, the more the merrier. Dig deep in the vaults, remaster, remix, and keep 'em coming.
Under that set of criteria, the box set reissue of the year award has to go to Sign 'O' The Times. The Prince estate obviously gets it. After an excellent job on the 1999 album, they have truly outdone themselves on this set. The super deluxe version features a whopping eight CD's, plus another two-hour DVD of a live concert. It's pretty much exhaustive. We get the original double LP, a CD full of 12-inch mixes, b-sides, extended cuts and edits, and then the real glory, a full three CD's of completely unreleased out-takes and alternates, almost four hours of unheard Prince music. Then there's a full two-hour concert from June of that year, in Utrecht. Other boxed sets might include a DVD of the same show, but instead the DVD here is another complete concert, a famous New Years Eve gig at Paisley Park, which included a cameo by Miles Davis.
Sign 'O' The Times may not be the very best Prince album, but it is the most varied, and it is still very good. The hits were the title cut, a dark tale that recalls Marvin Gaye protest and Curtis Mayfield movie edge, the Sheena Easton-vehicle "U Got The Look," and the joyous "I Could Never Take The Place Of Your Man." They don't sound much alike, because they came from a very big pot of different projects and shifting styles. Prince worked on at least three different albums at this point. There was Dream Factory, which was to feature Wendy and Lisa, but that project collapsed and the duo bolted. Then there was Camille, which was to feature funky cuts and Prince's phase-shifted vocals. Then came Crystal Ball which was originally meant to be a triple album, but Warner made/convinced Prince to scale it back to two LP's, at which point it gained its final title. Fans will know that a Crystal Ball album did come out in the '90's, made of a few of the tracks from these sessions, but that's not what we get here.
There are highlights galore. The original version of "I Could Never Take The Place Of Your Man" dates back to 1979, and while it's rougher and less sophisticated, it plain rocks, and how he held it back from any of his albums for the next eight years tells you a lot about his productivity. There are studio jams which take off in special moments, "Power Fantastic" still including Prince walking the band through the changes, telling them "bridge" and "chorus". There are three versions of the song "A Place In Heaven," including the original with a Lisa Coleman vocal, which got dumped after The Revolution disbanded.
Putting together a new group made Sign 'O' The Times come alive, and Prince was justifiably proud of this unnamed ensemble. Only Dr. Fink on keyboards remained from the original Revolution, although some of the extra players (horns, dancers, etc.) were upgraded to full membership, and opening act/protege Sheila E. became a central member. The DVD is particularly revealing, as Prince spends lots of time dancing in well-choreographed segments with all the singers.  But it was much more than a stage show, as the band takes off in great jams, including a massive, half-hour final encore where Prince boldly and proudly claims it's the funkiest band in the world, and who could argue. He had become James Brown, Hendrix and Smokey Robinson all rolled into one, the best band leader, musician and songwriter on the planet.
You can easily go down the Prince rabbit hole with this collection, going back and forth in archive websites, piecing together all the various track versions, songs that would later show up on Lovesexy, The Black Album and the '90's Crystal Ball. That's a ton of fun, something else I truly appreciate with a great boxed set release. You can spend hours learning more about the artist, and that's when these mega-boxes truly deserve the big price tags.
Posted by Bob Mersereau at 11:20 PM