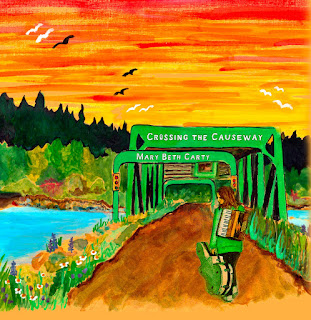 Mary Beth Carty is the Swiss Army Knife of the East Coast, playing accordion, guitar, bass, bones, and multiple percussion instruments on her own shows or supporting lots of others, such as Ashley MacIsaac. She's folk in the classic sense of the word, interested in the music and culture of her area, the Acadian, Gaelic, Mi'kmaq, and English of Eastern Nova Scotia and Cape Breton. She digs down into those musical roots to show us what connects us.
This album takes us along on her search, starting in her home of Antigonish, and looking east to Cape Breton. She takes a swing around the Island, making musical stops in Acadian villages, dance halls, Highlands National Park, Whitney Pier, Eskasoni First Nation, and all sorts of places where you hear jigs and fiddle tunes and Gaelic singing. Joining her are many of the region's best players, including Howie MacDonald, Colin Grant, Cassie and Maggie, Hilda Chiasson, Chrissie Crowley, Mac Morin, Morgan Toney, Bradley Murphy, and on and on, it's like the lineup of the Celtic Colours festival all on one record.
What's most impressive is Carty's ability to shine in all these different musical and vocal styles, bouncing back and forth between languages, old trad numbers, her new adaptations, and her own compositions. "Tow Truck Song" is a rowdy tongue-twister for a great Saturday night barn dance, with fiddle, accordion, and jaw harp driving everyone to the dance floor. Her "Dear Island," is about the view of Cape Breton as seen from her home near Antigonish across the bay. It's a lovely ballad that features a modern, longing melody, and on the chorus "vocables," which are syllabic sounds without meaning, like a blend of Gaelic, Mi'kmaq, English, and French words. Old and new, culture to culture, Carty bridges the gap between everyone as surely as the causeway links Cape Breton to the rest of North America.
In concert, Mary Beth brings along all her many instruments, languages, and lots of fun. Catch her Saturday, Dec. 10 at the Community Hall in Seaforth, N.S. at 7 pm. She's also at the New Glasgow Shoebox Cantina on Monday, Dec. 19.
Posted by Bob Mersereau at 3:55 PM