MUSIC REVIEW OF THE DAY: SUZIE VINNICK - FALL BACK HOME 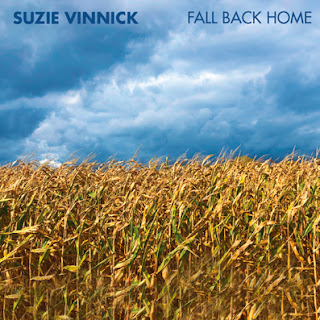 The more she writes and records, the more Suzie Vinnick helps define the sweet spot between roots and blues in Canada, where she is one of the country's finest practitioners. She crafts excellent, entertaining stories that run the gamut from pastoral folk to down-and-dirty electric jams, whatever suits her. She's like one of those fabled five-tool baseball stars who excel at all the skills, but instead of batting, hitting, etc., it's playing, singing, writing, rockin', and heart-tugging. She's already been nominated for three Maple Blues Awards coming up in January, Female Vocalist, Acoustic Act, and Songwriter, hoping to add to the ten she's won in the past.
Time spent outdoors did lots of good for us during Covid, and it worked for Vinnick as well. The results, found on this album, find her more reflective, reaching back to work in some favourite styles that highlight her versatility. On "Let Me Make It Up To You Tonight," she croons some late-night sultry jazz, featuring some virtuoso playing from harmonicat Carlos Del Junco and electric lead from the ever-supple Kevin Breit. "Big Train (From Memphis)," a John Fogerty tune, gets a Sun Records rockabilly treatment. And it's just vocals and upright bass from Russ Boswell for "The Pie That My Baby Makes," which includes some scat singing from Vinnick.
Expert players and writers crowd the ranks here, a testament to Vinnick's standing. Plenty of stars in their own right are happy to take support roles, including Colin Linden, Kevin Breit, Roly Platt, Samantha Martin and Delta Sugar, Matt Andersen, and even Bill Henderson, guesting on a remake of his old 70s Chilliwack hit, "Raino." A couple of East Coasters, Andersen and MIke Biggar, show up as co-writers as well. All the talent and variety on the album make this a pure pleasure, from start to finish.
Vinnick's doing a Hugh's Room Live show on Dec. 22 in Toronto, and then you're going to be seeing her coast to coast in the new year. First, she teams up with Australia's top blues star Lloyd Spiegel for a bunch of B.C. to Ontario dates, and then Nova Scotia's Charlie A'Court joins them for lots more dates East and West, right through until May 2023.
Posted by Bob Mersereau at 5:15 PM