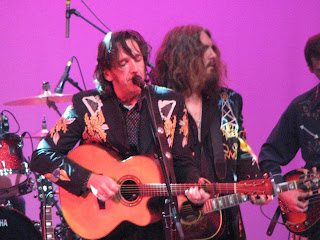 Hamilton Live.  Some graying punk rock, some energetic speed metal, old-fashioned hard stuff from teenagers, a beloved roots rock band, some classic alt-country sounds.  You can see it all in the Hamilton scene, just bouncing around from club to club on any given night.  That's what the Hamilton Music Awards has showcased for us, this week.  Here are some of my scattered memories, caught between cab rides and award presentations.

Last night featured the highlight concert of the awards, by Blackie and the Rodeo Kings.  The group doesn't really have a home town, as the members come from different areas of the country, but in a way Hamilton would be its spiritual centre.  Tom Wilson is indeed from here, still lives here, and was certainly in a great mood, dropping old and new city references, and memories of seeing Lighthouse as a kid in the very hall he was playing last night.  The band was in great form, with Colin Lindon ripping off some amazing solos on guitar, Stephen Fearing showing off his excellent pipes as one of the truly underrated singers in the country, and Wilson...  well, Wilson owned the building of course.  His Lean On Your Peers was the highlight, his tribute to the hardcore Hamilton heroes, known ones and unknown, some passed on, but still with plenty of spirit felt in the city.  Mentions of Frankie Venom and Tim Gibbons bring cheers in this place.  They were allowed off the stage after five encore songs.

After that it was over to This Ain't Hollywood, given the Top Venue award earlier at the Industry Awards portion of the weekend.  The show featured a return to the city of an old favourite, The Diodes.  Hamilton loves this 70's-80's band, especially since they are now doing some short tours, with the promise of more to come.  It's been a banner year or so for the Toronto group.  In my book The Top 100 Canadian Singles, the band grabbed a surprising #23 appearance with Tired Of Waking Up Tired, as voted on by 800 music pros and nuts across the country.  Then this summer, the Toronto Star ran a poll/competition for readers to pick the best Toronto band of all time, and shockingly, the group won the whole thing.  They are clearly on a buzz from that, and played this mini-tour to great success.  It's the original lineup, with two of the members coming back to Canada as they have lived in England for many years.  Opening with their famous cover of Paul Simon's Red Rubber Ball, the band ripped through their catalogue, including numbers from the just-reissued album Action/Reaction, which I'll review in the next few days.

You can also expect reviews of other Hamilton artists I've seen this week, including Michele Titian and The Dinner Belles.  Hamilton Music Week ends tonight with the Awards handed out, which I'll report on after.
Posted by Bob Mersereau at 1:19 PM