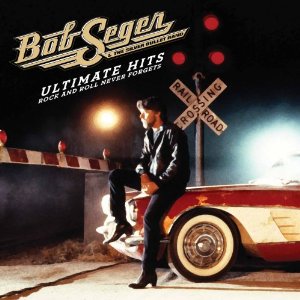 Seger doesn't get quite the props he deserves, considering the decent quality of many of his hits, and his strong live act, which made him a Detroit legend.  Like Peter Frampton and Springsteen, he toured and toured and toured again, conquering one market at a time, until the rest fell like dominoes by the mid-70's.  As for his hometown, he was a god.  Those with long memories might also recall a time when "play Bob Seger" was yelled at bar bands as often as "Free Bird".

It all went south when he sold out with that Like A Rock hit, which was pounded into the airwaves as a Chevy ad.  Of course, it's a match made in Motor City, but it was still a time when that wasn't considered cool.  Neither was the disco-funk of Shakedown, from the Beverly Hills Cop II soundtrack.  It might have given him a #1, but it also killed what was left of his core audience.

Listening through this double-disc does provide lots of highlights though.  I always liked Mainstreet and Night Moves, and Rock And Roll Never Forgets is one of the best songs about the rebels growing up, with "sweet sixteen's turned thirty-one".  Some of them were played so constantly, it's permanently ruined the effect, but there's a reason Old Time Rock And Roll, and Against The Wind were monsters.  The compilers gave us a good look at the live show too, with versions of Travelin' Man and Beautiful Loser that show how he owned the hockey rink.

This set is part of the comeback that's been coordinated this year, with a major touring schedule, and a couple of new singles that have found a certain audience  Tellingly, they are covers, Tom Waits' much-heard Downtown Train, and an old Little Richard romp, Hey Hey Hey Hey.  Both are here of course, but neither feel right, and we're left to wonder if rock and roll did actually forget Seger, or simply gave him the boot.
Posted by Bob Mersereau at 7:00 PM