MUSIC REVIEW OF THE DAY: TOM WAITS - BAD AS ME 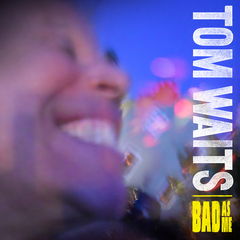 No overriding concept here, no songs from stage plays, or themed weirdness, it's just new, and great songs.  And what a delight.  Written and recorded quickly earlier this year, Waits goes through all his usual styles, and even comes up with a few new ones.  The disc is also more lighthearted than usual for him, not just bemused but also somewhat satisfied with humanity and times' passage.

In the title cut, our eccentric friend is thrilled to find a co-conspirator, a lover, who is equal to the task in his escapades:  "You're the fly in my beer/you're the key that got lost....you're Mother Superior in only a bra."  Where he gets his Film Noir characters is a thing of mystery, and as much from his gut instincts as from his imagination.  And of course, he's still the best and main character in many of his songs.  Unlike Bob Dylan and Paul Simon, who have taken to dissecting mortality as they approach their ends, Waits downright embraces it.  "Satisfied" tells us exactly what he thinks about death, when he writes "I will be satisfied before I'm gone."  Then he makes a shout-out to the kids that wrote about Satisfaction way back in the 60's:  "Now Mr. Jagger and Mr. Richards/I will scratch where I've been itching/before I'm gone."  What makes it even better is that Mr. Richards is playing guitar on the track.

In fact, Richards shows up for several cuts, and even sings on one with Waits, the simple ballad Last Leaf, which is pretty much about being the last leaf on a tree in fall, and the metaphor is way too obvious to bother to analyze.  The two croak through it, and it's as perfect as you can imagine.  As usual, the sounds of the disc and the performance are just as important as the composition, and Waits pulls out his usual crazy-quilt collection of tin pans and squawks.  But in keeping with the lack of concept, the songs are more traditional, with melodies and verses and such, with the ballads being especially attractive in their melancholy.  Still, he comes up with more tricks that haven't been featured before.  Hell Broke Luce is about army vets, no doubt recent ones returning from the Middle East, as Waits chants his way through one of those marching songs soldiers do ("I had a good home but I left, right, left").  The song ends with disturbing reality:  "Now I'm home and I'm blind and I'm broke/what is next?"

Joining Richards are more individual players, filling sonic roles.  The great Marc Ribot is key on guitar, playing it like Waits sings.  The list also includes Flea, blues harp maestro Charlie Musselwhite, Los Lobos mainstay David Hidalgo on accordion and guitar, Texas Tornado Augie Meyers on keyboards, Les Claypool, and Waits' son Casey is now his main drummer.  If this reads like the cast of a circus freak movie, you got the right idea.
Posted by Bob Mersereau at 12:58 PM