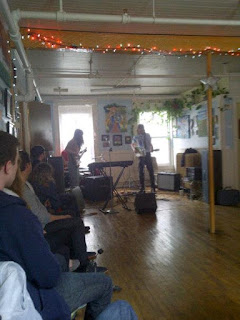 Hope you had a good RSD.  And let's face it, either you know what RSD is, or you don't.  For lack of a better explanation, those who do are music nuts.  RSD is Record Store Day, the annual event that calls on fans of independent music stores to come out in force to their local emporium, to celebrate that once-dying, now rebounding shrine.  A few years back, locally-owned stores were on their last legs, as the near-collapse of the music industry plus exorbitant rents were forcing their doors shut.  But a new interest in vinyl, plus a sudden hipness factor, as well as that old standby, nostalgia, helped save many stores.   A lot of the credit goes to RSD.

Here's how it works:  only independently-owned record stores can get RSD product.  There's actually an organization, based in New England, which oversees the day, and monitors who gets what.  If you are a true indie store, you're eligible to pick up hundreds of one-time only pressings, mostly on vinyl, from the very hip to the biggest stars.  Today, you could get a Kate Bush picture disc, a pink vinyl copy of The Velvet Underground's Loaded, or the brand new release from Devo on LP.  There were boxed sets of rare Stax b-sides, a cool 45 with Otis Redding doing Respect on one side, and Aretha Franklin's hit version on the other.  Reggae fans were going to Lee "Scratch" Perry dubs and even Springsteen is now three years into releasing special singles for RSD, popping out one from his new album.

I hit my local indie, Backstreet Records in Fredericton, a satellite of the long-running store of the same name in Saint John.  Now, I never think of the town as too much of a collector place, but I'm going to have to rethink that opinion.  It turns out they were lined up in the morning for the opening, and lots of the special items were gone by the time I arrived in the early afternoon.  So, I missed out on a vinyl EP by Leonard Cohen, Live In Fredericton, which really, I should have bought in Fredericton, duh.  Hopefully they'll have some left elsewhere.  I had to settle for a Paul McCartney reissue of his 1971 hit Another Day, never on LP, plus the latest Justin Townes Earle 45 with an inclusive b-side.

Like most stores involved, there was live music as well, with the local indie scene well represented, and a couple of touring acts in town for shows tonight including Octoberman.  I caught a set by locals Motherhood (pictured), a trio that featured some melodic quiet parts to some all-out noise, with ambitious arrangements, nifty boy-girl vocals, and some pretty intricate drumming, I thought.  Spotted in the crowd were young CBC hipsters Matt McCann and Matt Bingley, the latter a couple of hundred bucks lighter in the wallet.  Way to go, Matt.  As for those thinking, gee, I should have gone to support the stores, RSD is just a promotion, albeit a great one.  Go anytime.  There's life in music, especially if you want to get back into the physical fun of owning neat stuff.  There are still quite a few of the RSD records left, too.  Just no Leonard Cohen.
Posted by Bob Mersereau at 9:15 PM