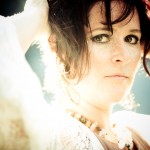 This is a beautiful and perfect example of what a singer-songwriter album should be.  Goldman, who splits her time between hometown Toronto and Boston, is in the Shawn Colvin-Lynn Miles school, with the requisite Joni touches.  She has a haunting and lovely voice, and has the remarkable ability to take an idea, and slices of her life, and turn it into full set of songs.  You know, an album, like they used to make 'em, with a recurring theme and an overall sound, and it all makes sense and touches your heart and makes you think about your own life.  Whew!

Goldman has had career stops and starts since her debut disc in 2000, most notably caused by an accident in 2004 that took her two years from which to recover.  Grand things were happening, but so was a restlessness that saw her return to university in Boston.  This group of songs comes from that experience, and all that went with it; starting over, being a fish out of water, feeling alone, learning to adapt, missing certain people, and questioning decisions.  The scenes are vividly painted in a few sentences, whether it's the students she observes around her in the Ivy League, or hitting the road back in the music world.  The search for home, or at least, the feeling of home, connects it all.  Is it a town that will provide it, or the road, or maybe a lover?  The answer doesn't come, but she gets to chronicle the changes, for herself and  us.

Or maybe she did figure out at least part of it.  Going back to school at 39, starting over, moving back and forth, being restless, she says she realizes she is the Gypsy Girl.  And for all you people who never quite feel settled, dive in.
Posted by Bob Mersereau at 9:42 PM