MUSIC REVIEW OF THE DAY: GORDON LIGHTFOOT - ALL LIVE 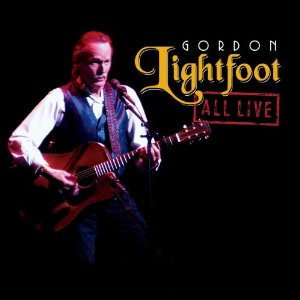 Forty, fifty years from now, people are still going to be saying, "I saw him at Massey Hall."  Gordon Lightfoot is associated with the venerable building in a way only a special few become; like Elton John at Madison Square Garden, perhaps.  Lightfoot's yearly shows at the Toronto venue are the highlight of his year, and of course, for the audiences as well.

This album is made up of shows recorded at Massey Hall from 1998 to 2001 by the folks from Grant Avenue Studio in Hamilton.  Such is the quality that not an overdub or fix has been made, not a change to the original mix.  Kudos to the engineers, first.  Then, of course, to the musicians, Lightfoot's long-serving and proficient group, plus Gord himself, daring what few have done over the years, releasing a truly live album.  If there are shaky moments, they are few and far between.  It is, however, the Lightfoot of 10-plus years ago, of stronger voice before his serious illness, but he still puts on a fine show these days.  Why he sat on the tapes for so long is a question, but it's a strong and enjoyable set.

I like that it's not a greatest hits; there are lots of favourites for sure, but it's liberally blessed with lesser-known numbers and some of his then-recent and woefully overlooked numbers.  As this has the chance to be a strong seller for Lightfoot, hopefully songs like A Painter Passing Through, Shadows and especially 1993's Restless will become better known.  They certainly sit strongly among the best-known ones here, If You Could Read My Mind, Sundown, Carefree Highway, and of course, Wreck Of The Edmund Fitzgerald and Canadian Railroad Trilogy.  In fact, those numbers are such a part of our conscious, it's the lesser-known ones that proof most enjoyable here, showing how truly deep the man's songwriting catalogue is.

It galls me to know that in the U.S. and England, critics and music snobs have little time for Lightfoot.  Well, screw 'em.  This is our culture, our folk music.
Posted by Bob Mersereau at 9:37 AM