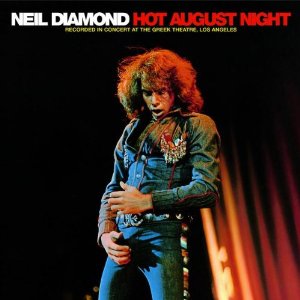 This is the album that turned Diamond from a successful singer-songwriter into a superstar.  The double-live album was a smash around the world, and started his reputation as a master showman.

It's exactly the right time to hear him live.  1972 was when he was starting to experiment with with concept songs and albums, and hadn't gone too far down the path to preciousness (I'm not a fan of Jonathan Livingston Seagull).  He was still going for Top 40 hits and hip status, rather than Adult Contemporary and the Barbra Striesand crowd.  So we get a great run of classics:  Solitary Man, Cherry Cherry, Song Sung Blue, Cracklin' Rosie, Sweet Caroline, and Kentucky Woman among them.  A 36-piece string orchestra brings grand drama to the early 70's songs, but I prefer the stripped-down, rock band versions of the older hits.

The anniversary edition is a 2-hour double CD, lengthened by the discovery of three cuts edited out of the original album.  The highlight is a rare cover for Diamond, Randy Newman's I Think It's Going To Rain Today, the kind of melancholy and memorable number Diamond was trying to write by then.  It sits well with his I Am...I Said and Play Me.  Thankfully, Diamond has reclaimed his image in the last few years, and put You Don't Bring Me Flowers to rest.  This album shows what all the fuss was about.

Posted by Bob Mersereau at 9:22 AM