MUSIC REVIEW OF THE DAY: PHILLIP PHILLIPS - THE WORLD FROM THE SIDE OF THE MOON 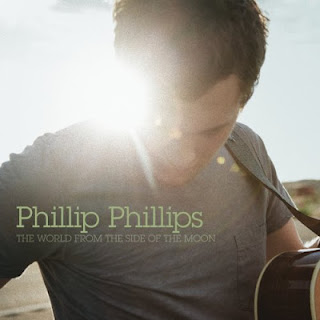 Now this is a rare thing:  An American Idol winner that I like.  Well, like may be too strong.  Let's say I don't hate him.  Since I don't follow the program, I can't comment on what's going on with the contestants but I have heard the many albums over the years, and wished I hadn't.  Phillips on the other hand has made a full, quality debut disc that shows all the marks of a complete talent rather than a manufactured one.  He's a songwriter, a strong singer, and has a progressive feel to his music, rather than the usual Idol pop or country-by-numbers.

However, he's hardly an innovator.  This is produced for the Mumford fans, or maybe the Avett Brothers followers, and he owes royalties to Dave Matthews for the loan of his voice.  Hit single Home is a bit more pop than the rest of his album, written for him as the finale song for Idol, but really isn't far from his own material.  There's more of a groove to his own songs, that hippie folk-rock with big beats.  Again, it's nothing new, but it's modern.  There are occasional jazz touches as well, including the song Drive Me, which adds a sax solo and a horn backing, and that's probably the biggest innovation.

The thing is, he's an Idol winner, and there's too much at stake for him to get the full freedom for his debut.  This is an immaculately produced set, and it doesn't stray far from the above-mentioned influences, plus the little touches found in the sound of Arcade Fire and Fleet Foxes.  But for once, I'm keen to hear how this guy develops, because it's possible he'll bring even more respectability to the Idol franchise.  Then again, he's already yesterday's news in that show's plans, and I'll be perfectly happy to keep ignoring them unless they find more like this guy.
Posted by Bob Mersereau at 8:19 PM