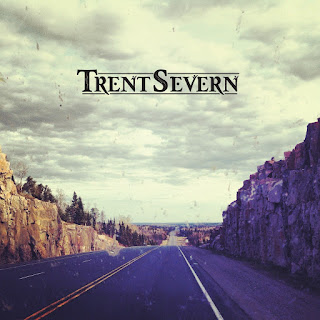 Trent Severn is above all else, Canadian.  The trio takes its name from a waterway in Southern Ontario, the area common to them all, and was formed by three friends determined to "write songs that touch the hearts and tell the stories of our Canadian friends, neighbours and legends."  That's quite the manifesto, but certainly one that should raise a little national pride, not a bad thing in the music community.

The group is made up of some surprising folks, best known for quality pop than the roots-folk presented here.  Emm Gryner has Juno nominations, her own record label to put out her thinking-person's albums, and a year in David Bowie's band on her resume.  Dayna Manning has three of her own albums of strong singer-songwriter stuff, and Laura Bates is an in-demand modern fiddler.  But when they got together, they chucked that aside for a new-found interest in harmonizing together, and playing basic instruments such as banjo, fiddle and bass.  And lots and lots of harmony.  It really is a vocal group first, and they do indeed have a blend.

Lead track Snowy Soul spells it out pretty well.  Their voices ring out, with a CSN-inspired blend.  The Tragically Hip are playing on a stereo, and the song is about the far north, about someone who wants to get back there, "When Churchill feels like Memphis, you know you're a cold rolling stone."  It's a potent mix, their vocals soaring high and clear, like chimes.  Elsewhere, there's more of a folksy sound, with Appalachian and mountain music as an influence.  This is a bit odd at times, given the Canadian background of the members, and the purpose of the group, and feels for a time like they've joined all those other post-O Brother bands.  For a precarious moment, comparisons to Alison Krauss come to mind.

Thankfully though, the group return to folk more suited to this side of the border, and we can bask in all the Northern reflections.  It's impressive and clever how much they cram in, from references to Hinterland's Who's Who, to Brian Mulroney and Free Trade, to Crown Royal and the Black Donnellys.  Best of all is Bluenose On A Dime, about moving from L.A. to Montreal, and discovering Kate McGarrigle is your new neighbour:  "Everything just got better/Living in an NHL sweater all the time/Bluenose on a dime and you were mine."

The members of Trent Severn didn't have to do this, and didn't have to be so blatantly Canadian.  It's usually against our nature to be so obvious, unless you're Stompin' Tom.  It feels a little weird at first, but pretty quickly it feels just right.
Posted by Bob Mersereau at 7:46 PM