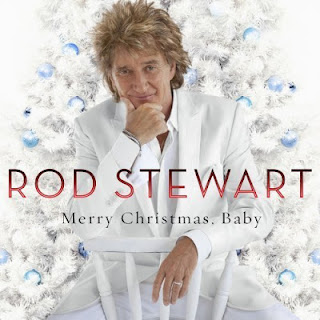 This should be a pretty easy decision for you.  If you like the Great American Songbook disc, okay fine.  If you wish he still sang Maggie May, he doesn't here either.  It's the usual holiday songs, backed by an orchestra and produced by David Foster.  That's like adding sugar to your egg nog.  In case you are still holding out hope Stewart might inject a little soul into the proceedings, all there is is a decent duet with Cee Lo Green on the title cut, but it barely gets moving, a rote version of this overdone favourite.  Elsewhere, the guests keep showing up, including the ubiquitous Christmas elf Micheal Buble, Chris Botti, and Mary J. Blige.

Stewart also commits sacrilege, doing one of those duets with the deceased, grafting on some Ella Fitzgerald vocals to What Are You Doing New Year's Eve?  This really must stop, and fast; there's no reason for it, and it's basically grave-robbing.  He obviously thinks he's in the same class as a singer, and that isn't the case.  Oops, guess I'm showing which Rod I like better.  The only present here is a download code for a track from his next album coming in the spring.  It says it's going to be a ROCK album (the italics are theirs).  I guess I'm not the only one demanding an end to this syrup.  I couldn't bear to listen though, I'd rather live with the hope and hear the whole album, than be disappointed early.
Posted by Bob Mersereau at 4:40 PM