MUSIC REVIEW OF THE DAY: A VERY SPECIAL CHRISTMAS 25 YEARS 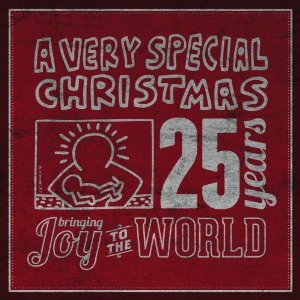 The A Very Special Christmas series has presented a lot of great Christmas collections over the years.  We've heard new songs recorded by major stars, and some rare b-sides and such made easily available, making over $100 million for the Special Olympics.  The very first collection in 1987 featured some of the biggest stars of the day, including Bruce Springsteen, Sting, U2, John Mellencamp, and The Pretenders.  There was usually a few people worth listening too, if you were a music junkie, mixed in with more mass-appeal folks like Whitney Houston, Bon Jovi, and Madonna.  No matter your tastes, you could usually hold your nose for the odd cut or two that didn't fit your style.  And there were always some special treats, like Run-DMC giving us Christmas In Hollis.

That mostly continued through the years, except that in those days it was very rare to hear new artists doing classic covers, such as U2 doing Phil Spector's Christmas (Baby Please Come Home).  Now, everybody has done it, and there's isn't a track out there that hasn't been beaten to death in the stampede of Christmas albums of the last two decades, in no small part due to the V. Special Christmas series.

For the 25th anniversary, they would have had the choice of doing an anthology of great tracks over the past releases, but they have already done that, plus all the original albums are still available.  So this does feature new stuff, but boy, has the pot been diluted.  These used to be CD's I'd be glad to play at least a couple of times over the holidays, but aside from a couple of tracks, there's not much to get excited about.  The compilers have eased into a middle-of-the-road format, similar to dozens of other compilations that will come out this year, and line the shelves from seasons past.  It's the adult contemporary crowd, including Amy Grant, Vince Gill, Rascal Flatts and Martina McBride from the country side, and in the pop world, the always-present Michael Buble, Christina Aguilera, and Jason Mraz.  There are names I've never run across, such as Wonder Girls, Graydon Sanders and Jono, and Francesca Battistelli, none of whom make me care that I don't know them, or even lead me to Google them.  Dave Matthews is about the hippest name (**clears throat**), with a live version of his Christmas Song from a 2010 concert.

I'll single out two songs which I liked.  The big number here is a new track from Train, and I must admit their Joy To The World is a different and cool take on the usual.  The one real piece of fun belongs to the always-entertaining Cheap Trick, who have re-made their classic I Want You To Want Me into I Want You For Christmas.  It's the only song that rocks, too.

It's too bad this is what has become of the Very Special Christmas series, but I have a feeling they know what they're doing.  They've certainly made a ton of money over the years for the good cause, and this is probably what will sell the most.  It's too bad it sounds likes almost every other Christmas compilation out there.
Posted by Bob Mersereau at 7:35 PM