MUSIC REVIEW OF THE DAY: GHOST BROTHERS OF DARKLAND COUNTY 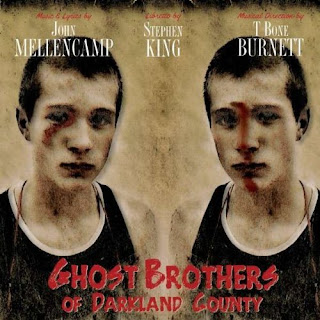 Well, I just don't know.  Artists love to play around in other genres, expanding their creativity, challenging themselves.  There are lots of examples of musicians who are also painters (Tony Bennett comes to mind), or songwriters who try their hand at prose (lest we forget Dylan's Tarantula or Lennon's In His Own Write).  Mr. Bennett aside, those who manage to become two-sport all-stars are few and far between.  There aren't many Bo Jackson's among musicians.


In this case, we have a team trying that stretch.  And they've been at it for awhile.  It started 13 years ago, when John Mellencamp phoned up Stephen King to suggest they turn a true story that happened in his hometown into a play.  King was up for it, and slowly the work took shape.  King wrote the play (performed first last year), Mellencamp the songs, and T-Bone Burnett was brought in to produce a soundtrack of the songs, so it works as an audio piece as well.  It's certainly a unique work, actors, singers and musicians all part of the play.


It's the tale of two sets of brothers, one pair long-dead, appearing as ghosts, the other their nephews.  Both take sibling rivalry to the extreme, with a deadly fight consuming the first, and the younger ones seemingly headed that way.  Stuck in the middle is the brother of the dead pair, and the father of the younger fighters, played (and sung) by Kris Kristofferson.  The album features some dialogue before each track, followed by a song that fits the story-line.  The bulk of the play isn't here, we get just enough to follow the story to compliment the music.  However, the full script has been included on the enhanced CD for those interested.


And there's the problem.  It seems like a pretty good story, and may be a fine play, but the snippets of dialogue on the disc sound wooden for the most part.  You can't argue with the quality of the musical cast, which includes Elvis Costello, Rosanne Cash, Neko Case, Sheryl Crow, Taj Mahal, and real-life feuding brothers, Dave and Phil Alvin, once of The Blasters.  Costello has fun being the devil character, Kristofferson is perfectly cast as the grizzled dad trying to calm down his fighting kids, and Cash knows how to sing the sorrow of a mother with trouble in the house.  I just kept hoping for better songs.  Writing roots-rock songs, whether honky-tonkers for Sheryl Crow's rowdy bar girl, or nasty back-and-forth arguments for the Alvin's, is such a tricky business.  You're trying to move the story along, but still keep the listener in mind.  I like the slower, thoughtful numbers here, Cash's You Don't Know Me and Kristofferson's two cuts, but I really can't see repeated listening.  It's a better idea than it is a finished project.
Posted by Bob Mersereau at 7:03 PM