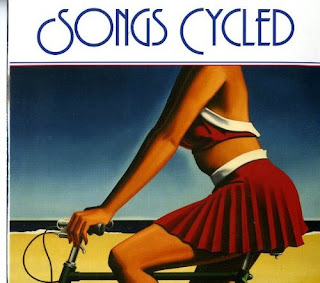 Oh that rascally Van Dyke Parks.  His fame comes from the rock world, but he's no part of it.  The legendary lyricist for Brian Wilson's SMiLE sessions has been a go-to guy for dozens of folks looking for his idiosyncratic style over the decades, but almost always as an arranger.  From Harry Nillson and Loudon Wainwright III to Rufus Wainwright, Joanna Newsom and Grizzly Bear, if you want something unique and intricate, with orchestration, Parks is a worthy and complicated presence.  Along with several movie scores, his own albums have featured calypso, Japanese, orchestral, Gershwin-esque and modern classical sounds, as well as a connections to kooky cartoon music.  There's a lot going on in that boy's brain.


Over the past couple of years, Parks has been recording again, this time in a series of 45 rpm releases, which are now collected here.  It's a mix of new and old themes, some of which date back to his first, infamous 1968 solo album, Song Cycle. That's the failed project that showed, despite his pop associates, he'd never be close to the mainstream, and he still isn't.  Instead these are richly orchestrated numbers complete with his own fun voice, sort of what I imagine Mark Twain might have sounded if he sang.  There's a grand theatrical feel to each number, and certainly something from classic Disney scoring as well.  Parks has neatly wrapped up much of his career in these dozen cuts, from his beloved steel drum ensembles to his bouncy accordion South Seas melodies.  And surprise, he even gets political, raking oil companies, Wall Street and any who value money first.  With such a wide palette, this is now the best Parks album, and the one that may finally get him considered as fine a composer as his reputation has long suggested he should be.
Posted by Bob Mersereau at 1:19 PM