MUSIC REVIEW OF THE DAY: MAVIS STAPLES - ONE TRUE VINE 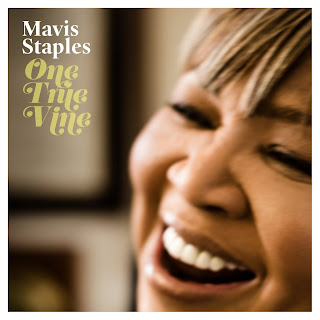 Such was the success of their first album together, the Grammy-winning You Are Not Alone, it's no surprise that Staples wants to continue the partnership with Wilco's Jeff Tweedy as her producer.  Of course, he's more than that, crafting the warm sound on these albums, and even writing some of the most inspirational material on the disc.  As unlikely as it might seem, Tweedy embraces her Gospel background and his three original tunes are as religious as the public domain hymns they sit beside on the disc.


It's one of those discs where everything is done right.  The mood is sanctified, searching rather than preaching.  The songs are built around simple accompaniment, mostly acoustic guitar, soft bass and simple drums, played by Tweedy's 17-year old son, Spencer.  That leaves the bulk of what you hear from the vocals.  Staples' controlled alto remains a magnificent moan, and the call-and-responce with the backing singers is classic Gospel, exactly the way she always did it with The Staple Singers.  The only nod to anything modern is a very rare atmospheric guitar part in behind, and once, Tweedy lets a short, strange-sounding lead break into a track.  But the focus is firmly on the the singing, as Staples shows us what soul is all about.


It's not just Tweedy's material that shines.  Other inspired choices come from the group Low (Holy Ghost), a chugging little number from Tweedy and Staples' touring pal Nick Lowe, with Far Celestial Shore, and a cover of a funky Funkadelic number, Can You Get To That.  Mavis goes back to her family roots with an old song from her dad Pop Staples, I Like The Things About Me, and digs into three old spirituals, the best of them the beloved What Are They Doing In Heaven Today.  Those classics come toward the end of the disc, as it builds from questioning to a positive celebration of faith.  It's not even a particularly dogmatic statement, but more of a relaxed, personal knowledge that the good in the world is there, if you embrace it.  The final word is left to Tweedy's verses in the title cut; "Life had ceased, I was lost and tired, you set me free from this mighty mighty fire, just in time to be my one true vine."  Love song or hymn, it doesn't matter, the point is salvation and peace is out there in some form, for everyone.
Posted by Bob Mersereau at 7:14 PM