MUSIC REVIEW OF THE DAY: JIMMY CLIFF - THE KCRW SESSION 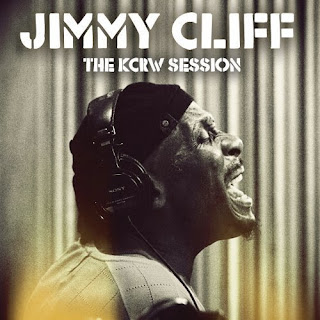 Reggae legend Cliff had a well-received comeback album, Rebirth, released last year.  As part of the promotion, he played this live set for beloved L.A. independent radio station KCRW.  Arriving with just  a second acoustic guitar player, Cliff did a nine-song, 37-minute set of his iconic hits, as well as taste of the new release.  The guitar playing is a little loose, and the tuning is suspect, but as for the man's voice, and the power of the songs, this is brilliant.

Rock fans may know the first song better from Bruce Springsteen, who first introduced his take on Cliff's Trapped on the Born In The USA tour.  Here, stripped of the live bombast, the power of the words comes through, a pledge of freedom.  Next up is a surprise, as Cliff turns the tables on those punkers who took great influence from his music, as he covers The Clash's Guns Of Brixton (as found on the new studio album), immediately identifying with the isolation of young people in 1970's England.

Cliff remains best-known as the actor and musician who did nearly as much to spread reggae around the world as Bob Marley did, chiefly with the film The Harder They Come.  While sadly the title track isn't performed here, two more included on the soundtrack are, You Can Get It If You Really Want and Many Rivers To Cross.  If you're not completely familiar with Cliff's catalogue, the several well-known tracks here start to make his influence clear.  Other hits include Wonderful World, Beautiful People, and the song that Johnny Rivers covered and made an international hit, I Can See Clearly Now.  But the best part of the disc is the warmth exuding from this man in the simplest of formats, two guitars and one voice, and how much power and emotion reside in his still-vibrant voice.
Posted by Bob Mersereau at 11:33 AM