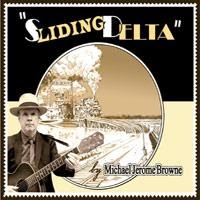 Listen to a first generation punk rock song, circa 1977, with today's ears.  Perhaps the Sex Pistols, maybe God Save The Queen, "and her fascist regime."  What was once scandalous, noisy, irritating to many, is now mild and mostly comical.  Now listen to a vintage blues number from the Delta or another rural area, 20's or 30's, maybe Skip James with Special Rider Blues.  I tell you what, that stuff is the real deal, scary and moving.  These musicians weren't trying to shock, they were just trying to live.  The blues was real and it still sounds great today.

Michael Jerome Browne knows his classic blues, and knows how to make them sing today too.  The Montreal-living, Indiana-born player has proven his skills over and over, a master of guitar, banjo, fiddle and more, a consummate roots performer who searches out the original fountain of songs from each genre for inspiration.  But he's never gone this deep into the catalogs of the greats.  Instead of the usual suspects in the covers department (Crossroads by Robert Johnson, heck ANY Robert Johnson), Browne has dug around for near-forgotten gems and lesser-known but equally-talented originators.  Barbecue Bob, anyone?  A 12-string guitar player from Atlanta in the '20's, Browne updates his Motherless Chile Blues.  But instead of imitating the rough style of Bob and the others, Browne plays the heck out of the tune, letting his talent  on guitar loose.  It's a salty number anyway, so it's still going to have lots of edge.

You'll know most of the others covered here, from Memphis Minnie to Charley Patton to Fred McDowell, and at times some of these were better-known than they are now.  The rock era seems to have shrunk the  huge blues canon down to a couple of dozen well-known numbers out of this era.  Browne instead plays the Bull Doze Blues on banjo, by Ragtime Texas, a/k/a Henry Thomas.  Bless Browne for his plaintive vocals, digit dexterity, and attention to history and detail here, down to the history lessons in the liner notes.
Posted by Bob Mersereau at 2:19 PM